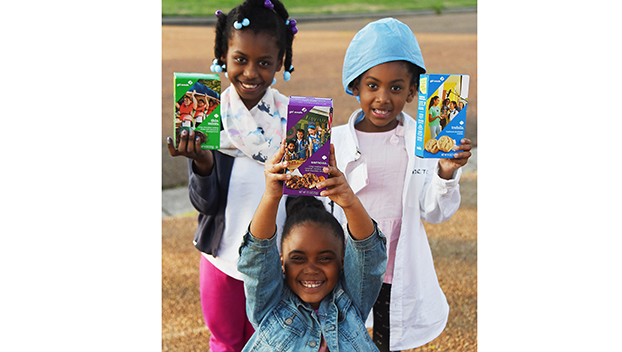 Wesley credits Girl Scouts with teaching her the skills necessary to be successful — the same skills she wants her daughters to learn today.

“I was kind of shy, very quiet. I sat way back in the corner,” Wesley said. “Now, I talk more, and I’m not afraid to get out there.”

Wesley said her biggest lessons came at the hands of her troop leader.

“Because I was shy, she would stick me out in the front,” Wesley said.

Wesley said she remembers being out in front of the crowd during flag ceremonies and other events, learning those lessons of leadership that have followed her into adulthood.

Wesley said she hopes her daughters Layla and Jakira learn those lessons and more.

“I hope Girl Scouts will help them build their self-esteem and come out of their shell,” Lashelia Wesley said. “Teach them how to be leaders.”

“It is a time to celebrate the wonderful sisterhood started 108 years ago,” Neighborhood Chairman Angela Brooks said.

As neighborhood manager, Brooks not only leads a local troop, she also works with the four other local troops in the area.

Area girls participate in a variety of activities, including selling and delivering cookies, learning about various countries and culture and volunteering in the community.

Each of the troops that participated made presentations about different countries. For their presentations, the scouts cooked food, demonstrated traditional dances and presented facts about the countries they studied.

This year the troops focused on the United States, Mexico and Zimbabwe, Brooks said.

“I liked Mexico because the Nachos were good,” Angela Brooks granddaughter Gabbie Brooks said about the Thinking Day activities.

Gabbie, Layla Wesley and Jakira Wesley wore patriotic colors and helped lead the Pledge of Allegiance during their presentation about the United States.

“We almost couldn’t get them out because they enjoyed it so much,” Angela Brooks said.

Girl Scouts volunteer and former neighborhood manager Frances Bailey said she has been involved in scouting for nearly 50 years.

“I enjoy seeing them learn the traditional skills, and I am glad to see them learn how to be entrepreneurs selling cookies,” Bailey said. “It is just a joy to see (scouting) continuously growing.”

Layla Wesley, Jakira Wesley and Gabbie Brooks all said selling cookies is one of their favorite things to do in scouting.

Through the cookie sales, scouts can fund everything from summer camp to out-of-town trips.

This year, the scouts are considering going to either Tennessee, Texas or Alabama, Angela Brooks said.

Layla Wesley said she enjoys how selling cookies brightens the day for her customers.

“I like putting smiles on people’s faces,” Layla Wesley said.

NATCHEZ — Thursday is the grand opening and ribbon cutting of the Sidney A. Murray Hydro Museum, which moved to... read more