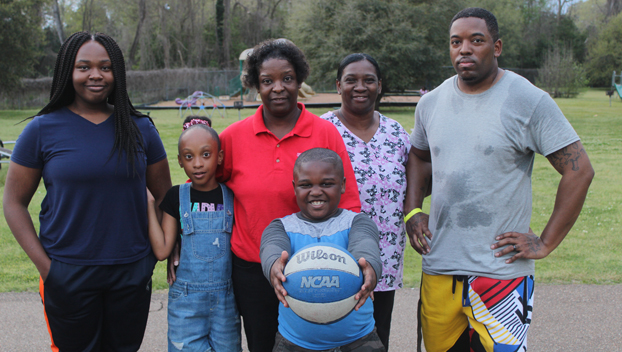 NATCHEZ — For one woman, returning to Natchez has been a great experience.

When The Dart landed near Concord Avenue Park on Saturday, Nancy White was with her family playing basketball.

White and her nephew, Charles Gaylor, were shooting a blue basketball on one of the three courts at Concord Avenue Park.

Having played basketball for North Natchez High School, White said she has passed on some advice to Gaylor she learned in her playing days.

“Always play for fun and never try to prove your ability to anyone else but yourself,” White said.

White was a member of the Class of 1989 at North Natchez High School and not only did she play basketball but she also was on the track and field team.

After graduating in 1989, White traveled to Minneapolis, Minnesota, to work at K-Mart. When White said she late learned about an opening of Isle of Capri Casino, she came back home.

White worked at Isle of Capri Casino for 15 years before it closed in October 2015.

“When I worked at the Casino, I met a lot of people,” White said. “People from different places and a lot of the people who visited here moved to Natchez.”

When she is not working, White said she loves to write short stories and have fun with the family.

“My family and I visit Concord Avenue Park as many times as we can,” White said. “It’s a place for everybody and it’s a place for people to relax. Concord Park is part of our neighborhood and part of the people. I like to go there to clear my head or just to be by God’s green earth.”

For the most part of White’s 49 years living in Natchez, White said she has come to enjoy living near her 14 siblings.

“I love living in Natchez,” White said. “I wouldn’t trade it for anything. It’s home and you know a lot of people.”