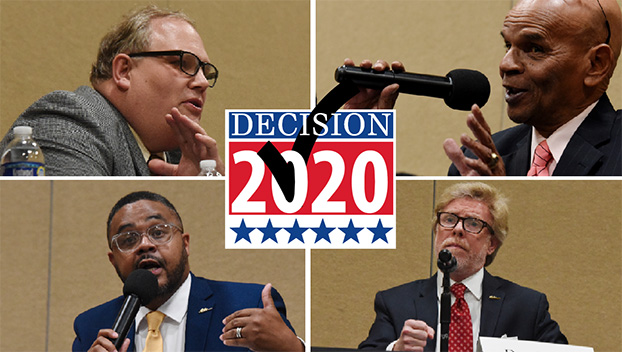 NATCHEZ — Natchez Mayor Darryl Grennell said Wednesday that he is working with local and state officials to delay the city’s municipal election cycle that is scheduled to begin with primary elections on April 7.

Grennell, City Attorney Bob Latham and other local leaders are working with the governor’s office, the secretary of state, the attorney general’s office and the local election commission to delay the city’s municipal election cycle, which begins with the April 7 primary, followed by the April 28 runoff, and the June 2 general election, states a press release from Grennell’s office.

“At this time of emergency, our local election is not really on the radar screen at the state level,” Grennell said. “This is because of our special charter and the fact that we are on a different election cycle from the rest of the municipalities. Only a few Mississippi municipalities have local elections this spring.”

While the delay has not yet been approved, Grennell said he has spoken with several local candidates who are voluntarily suspending their campaigns in response to the new coronavirus pandemic.

Democratic Natchez mayoral candidates Dan Gibson and Tony Fields, who are the only mayoral candidates who would be on the April 7 municipal primary ballots, both said they had already suspended face-to-face campaigning and that they support Grennell’s efforts to postpone the election cycle.

“I think it is a good call right now,” Fields said. “The way things are right now with the uncertainty, I have ended my campaign going door to door, and we are just campaigning on social media with no direct contact with people.”

Gibson said he believes delaying the election cycle is in everyone’s best interest.

“Right now we have so many concerns in our community over the spread of the coronavirus and the devastating impact,” Gibson said. “I just don’t think people need to be worried about an election right now with all this other stuff going on. We support the mayor with what he is doing.”

Gibson said he had stopped his door-to-door campaigns on Sunday because of concerns about potentially spreading COVID-19.

“We realized already that we have a lot of elderly in our community, and they are the most at risk and felt it would be a risk to them coming to the door,” Gibson said, adding his campaign will continue to campaign and communicate by social media and telephone.

“The wellbeing of our citizens is what is most important,” Gibson said. “Not politics.”

Fields agreed the public welfare is of paramount importance.

“I really don’t have a problem with delaying the election,” Fields said. “I just want everybody to be safe. The welfare of our citizens is what matters.”

Grennell said his office would provide updates on the status of the election delay request.

“I don’t think we have much choice do we?” Branyan said of the mayor’s decision.

Branyan said he has not changed his campaign strategy over the COVID-19 pandemic because he won’t be in the primary election.

“I’m not really changing anything until I know who is going to be in the final,” Branyan said, alluding to who might emerge the Democratic nominee between Gibson and Fields. “We’re just in the early days to know what is happening and who gets in the final mix makes a lot of difference in the strategies.”

Independent candidate Phillip West said he does not approve of Grennell’s decision to seek to delay the election cycle.

“I think it is inappropriate that he would make such a decision and move forward on making such a request without the input of those persons who are qualified to run for office and the input of those persons who oversee the elections,” West said, adding no one spoke to him about seeking the delay. “That is the foundation for our city and our country. We are a democratic society and you don’t make that kind of request to delay that kind of event unless you really have some real, real reasons to do that and unless other ways have been examined.”

West said he is aware that Grennell made the request due to concerns over the COVID-19 pandemic.

“There is nothing wrong with having a concern in its regard but a decision to request that the election be delayed should not be made by him without some consultation with all those persons who have qualified to run for office and those persons who are in a position to oversee the process,” West said, noting that three Democratic primaries were held Tuesday in Arizona, Illinois and Florida. “I think he has another agenda in my opinion. Otherwise he would have done this in an appropriate way.”

West said he has not changed the way his is campaigning over COVID-19 concerns.

“That’s not at the top of my agenda as relates to the way that I am campaigning, but I am concerned about the outcome and whatever happens in the city of Natchez as it relates to the election and that it be a fair process,” West said. “I don’t think we should have a process that is being dealt with because of some hidden agenda or whatever the case may be and that appears to be what this is.”