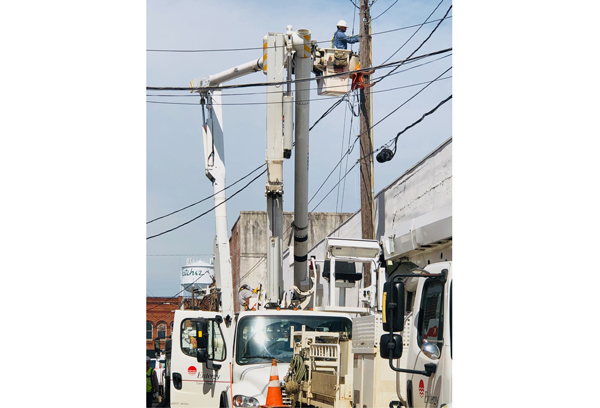 Entergy crews work Friday afternoon to repair an electrical line on Lucust Street that blew a fuse Thursday night. An Entergy spokesperson said approximately 25 customers were without power and that power should be restored by 8 p.m. Friday. (Ben Hillyer, The Natchez Democrat)

NATCHEZ — Entergy employees were working Friday afternoon to restore power to some 25 customers in downtown Natchez after a fuse blew Thursday night on a three-phase power line in the area behind St. Mary Basilica, an Entergy spokesman said.

“We’ve got electrical wires that have to be replaced,” said Tim Runnels, Entergy customer service representative.

Runnels said he anticipates the power should be restored by 8 p.m. Friday to the 25 downtown customers, which are mostly businesses that are not currently open due to the COVID-19 pandemic.

Meanwhile, residents of the area are posting on social media platforms that they heard some sort of “explosion” Thursday night in the downtown area.

Runnels said a fuse on one of the lines did blow Thursday night.

“A fuse blowing on the line can sound like a shotgun,” Runnels said, adding he knows of only one fuse that blew Thursday night.

The Mississippi State Department of Health reported the highest single-day jump in COVID-19 cases since it began reporting. The number... read more