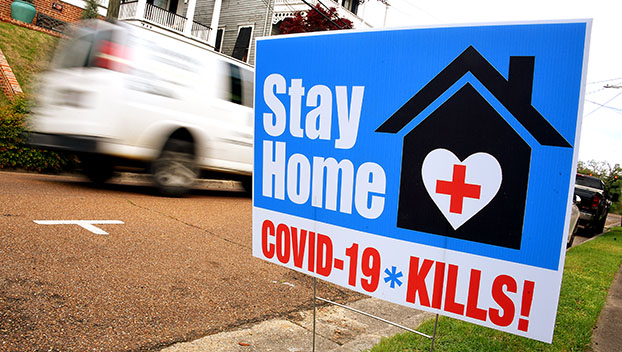 A truck passes by a yard sign on State Street advocating people stay home during the current COVID-19 outbreak. The local task force began working on signs that could be distributed as early as Monday for $5 apiece. (Ben Hillyer / The Natchez Democrat)

NATCHEZ — Asking residents to put up yard signs with a simple message such as, “Stay safe, stay home,” could be one of several ways local mayors fight the spread of COVID-19.

Natchez Mayor Darryl Grennell spearheaded the meeting, which was not open to the public or recorded, but allowed elected officials of neighboring cities and towns to share their ideas and perhaps share strategies they’ve already implemented to keep their citizens’ safe.

Other participants in the meeting were Merit Health Natchez CEO Lance Boyd and members of the Natchez COVID-19 Task Force, Grennell said.

“We will continue to host these conferences because what happens at one of these little communities affects the other,” Grennell said, adding that most of those who wind up severely sick in surrounding areas may be treated at Merit Health Natchez.

“We’re trying to prevent a major spike of illnesses in our area because we don’t want to have a catastrophic event at our hospital.”

Grennell said Boyd explained to those on the call how much protective gear, medications and breathing treatment equipment is available at the hospital and what is needed from officials to prevent shortages.

“(Boyd) stressed the importance for us as local elected officials to make sure that we do all that we can to educate people and implement the necessary programs to reduce the spread of the disease as much as possible,” Grennell said.

Officials also discussed signing a petition at Tuesday’s meeting for Gov. Tate Reeves to declare a local “stay home” so that law enforcement officers in the corresponding cities and towns would be given the authority to enforce safe practices, Grennell said.

However, Reeves coincidentally issued a statewide “stay home” on Wednesday so the petition was no longer needed, Grennell said.

Another idea shared at the meeting was to temporarily remove basketball goals from area parks so that people wouldn’t congregate for basketball games.

Grennell said Port Gibson Mayor Willie A. White had the idea to produce yard signs with simple messages on them such as, “Stay safe, stay home,” that would remind passersby that they shouldn’t be out in public unless they are performing essential duties and to keep a safe distance from others.

Grennell said the local task force began working on signs that could be distributed as early as Monday for $5 apiece. Businesses may also sponsor signs with their business logo, Grennell said.

“The $5 helps us to under wright the cost of signs, but we’re not turning anyone down who wants to put one up,” he said. “If someone wants to put up a sign, they just need to call and let us know.”

NATCHEZ — By email, by video and by blog posts, Natchez business leaders are reaching out in every conceivable way... read more