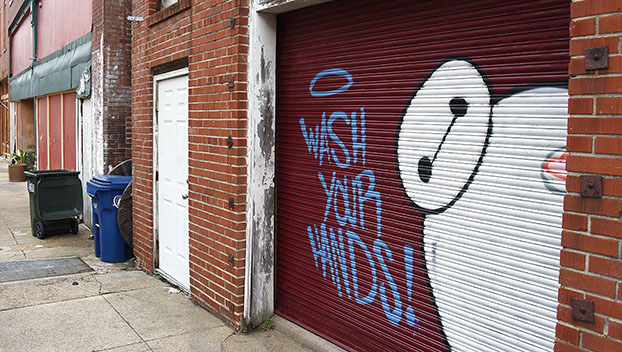 A painted image resembling one of the main characters from the 2016 Walt Disney animated film “Big Hero 6” called Baymax was painted on a garage door on Union Street. Building owner Darrell Smith said he first noticed the graffiti approximately three weeks ago but doesn’t plan to remove it. (Ben Hillyer / The Natchez Democrat)

NATCHEZ — Whoever painted a picture of a big white robot with the message “wash your hands” on a garage door facing North Union Street, did not have the property owner’s permission to do so.

However, the image is kind of hard not to smile at for some people living in the era of COVID-19, including the building’s owner, Darrell Smith of Dixie Furniture & Flooring Co.

“It was kind of funny and it is a message we all need to take seriously,” Smith said. “Under the circumstances, I’ve decided to leave it alone unless the city or the historic foundation says something about it.”

The image resembles one of the main characters called Baymax, who, in the 2016 Walt Disney animated film “Big Hero 6,” is a robotic nurse.

Smith said he first noticed the graffiti approximately three weeks ago, which is located on a roll-up garage door at the back of his business at 524 Franklin Street.

“I rarely make that block to Union Street and one of my guys told me it was there,” he said. “I saw it on Facebook before I saw it myself.”

Smith wasn’t the only one amused by the image, he said, adding members of his own family explained to him who the cartoon character was.

People have stopped and taken pictures in front of the graffiti and posted them on social media.

“Whoever did the painting did a good job and I saw the humor in it. It wouldn’t be funny if it was on someone’s vehicle or somewhere else important without their consent,” Smith said. “… For me, it’ll be a reminder of the trying times we’re in. … I never called the police because I figured they had more serious things going on.”