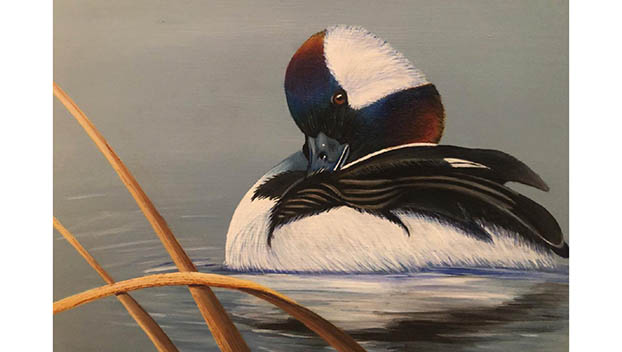 There are three first place winners chosen out of the dozens of paintings submitted for the competition and one Best of Show winner, said CHS Art Teacher, Andree Gamberi.

Lessley and her duck, a colorful bufflehead named ‘Sir Roy G. Biv,’ made it to the final round of judging for the Best of Show award and were instead chosen for the Sid Crawford Award, which was newly created this year to honor a graduating high school senior.

“My duck’s name is ‘Sir Roy G. Biv,’ which is the acronym for the colors of the rainbow,” Lessley said, adding the name characterizes the rainbow-like reflection of light on the duck’s face.

Another characteristic that Lessley chose for her duck is the beak tucked into his wing, which Lessley said she believed made him look unique from the other ducks in her class.

“I flipped through nature books and looked at other ducks people had done in the past,” she said. “I knew I wanted to do a bufflehead and was drawn to the look because it didn’t look like anyone else’s.”

Lessley said she has always had an affinity for art but didn’t realize her true potential as an artist until taking Gamberi’s class.

“I would not have been able to win this award without her guidance,” she said.

After graduation, Lessley said she plans to study biology at the University of Mississippi and later hopes to attend med school to become a radiologist.

Residents of Wilkinson  County and surrounding communities can be tested this week for COVID-19 as the University of Mississippi Medical... read more