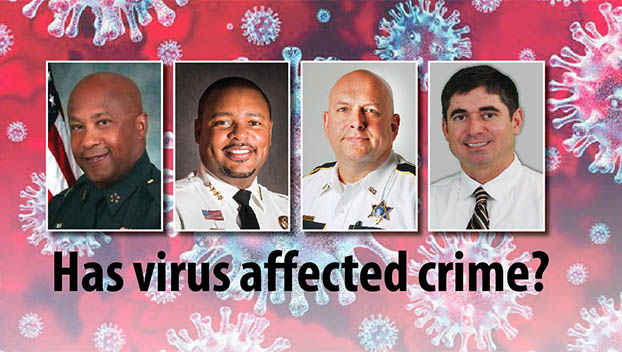 NATCHEZ — With stay-at-home orders in both Louisiana and Natchez, residents have heeded the message and stayed home, leading to a decrease in reported crimes, area law enforcement officials said.

Over the past weekend, Walter Armstrong, Natchez police chief, said he noticed the number of reports that the Natchez Police Department makes decreased.

From Friday to Monday morning, Armstrong said only 12 reports were written by Natchez police officers.

“Normally during that same timeframe, we would have done anywhere from three to four times the number of reports,” Armstrong said. “Between that and patrolling the streets, we have noticed fewer people are being out. In general, our call volume has decreased and that tells us people are adhering to the signs we have out, the orders from city, county and state government.”

The same can be said for the Vidalia Police Department.

Joey Merrill, Vidalia police chief, said both the number of calls made by citizens and numbers of crimes reported have decreased since stay-at-home orders went into effect.

“The decrease in crime is always a good thing,” Merrill said. “Vidalia is a safe city and we strive to keep crime as low as possible at all times.”

While the number of crimes committed has decreased, David Hedrick, Concordia Parish Sheriff’s Office chief deputy, said domestic violence is on the rise.

“I think it’s tragic and people need to talk their problems out and negotiate conflicts peacefully,” Hedrick said.

“I believe that the coronavirus has helped us out in the county,” Patten said. “We have seen the decrease in crime rate and I believe part of it is that people are staying inside and staying safe. The other reason is that we haven’t let up on the force of the law.”

Patten said one of the reasons the number of calls and number of crimes are down is because criminals have fewer opportunities to commit crimes.

“Most criminals are opportunists, meaning that when they see an opportunity to take advantage of a situation, then they do it,” Patten said. “I think the coronavirus has helped take away those opportunities because people have stayed at home where they are not getting the opportunities that would normally come their way.

With everyone staying at home, the opportunities have shrunken dramatically.”

In essence, Patten said, the pandemic has changed the way people look at life.

“It has made us aware of the small things in life,” Patten said. “As far as crime goes, I love the fact that there’s a drop. That’s actually one of the good things that has come out of COVID-19 is the lower crime rate, so I’m not complaining about it.”

NATCHEZ — The Mississippi State Department of Health reported 13 new COVID-19 deaths on Tuesday, which is the greatest number... read more