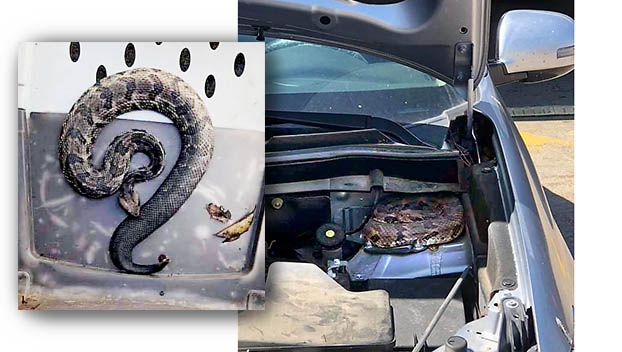 A rattlesnake was found coiled up inside an engine compartment Tuesday at Mississippi Auto Direct. (submitted photos)

Rattle in the engine: Resident finds snake under hood of vehicle

NATCHEZ — A routine oil change for one Lake St. John resident turned into a breath-taking experience for her and an oil-change technician at Mississippi Auto Direct on Tuesday.

When the technician, Travis Bradley, opened the hood of the gray Mitzubishi he found a timber rattlesnake coiled up and sitting in the corner in front of the steering wheel on the driver’s side.

“It really shook me up,” Bradley said. “This was the first time I had ever seen a rattlesnake underneath the hood of someone’s car.”

Sadie Easom, who owns the Mitsubishi in which the snake sought refuge, said the experience took 10 years off her life.

“I don’t like snakes, period!” Easom said. “Rattlesnakes are dangerous, and they are crawling around here near Lake St. John. I just hope it doesn’t happen again.”

“I have been on the job for eight years, and I have only come in contact with a couple of poisonous snakes in the city limits,” Myers said, adding he removed the rattlesnake from the car and placed it into a cage. “I took the snake to a place where it would be safe (and released it),” Myers said.