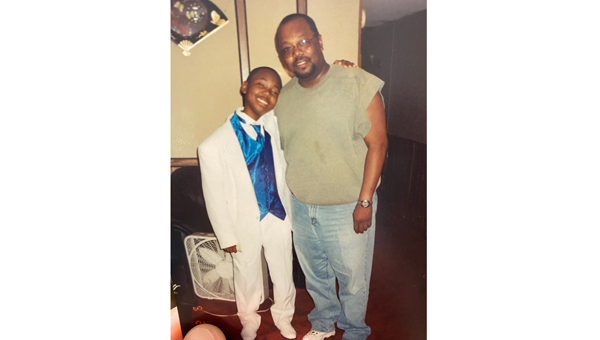 In this old family photo, Kimar Cain as young man, poses with his father Jerry Cain who died Monday with COVID-19. (Submitted photo)

In life, Jerry Cain’s youngest son, Kimar Cain, said Jerry was a loving father to him and his six siblings and was a faithful husband to his wife, Mamie Cain.

Jerry also was a veteran of the U.S. Army, where he served on the special operations force, Kimar said. Jerry took pride in his service and enlisted in the Army shortly after he finished high school, Kimar said.

“He loved watching Westerns on TV and loved sharing stories about him being in the Army,” Kimar said. “He had a joyous spirit and enjoyed making others laugh.”

Kimar said his dad shared stories with him and his siblings about jumping out of helicopters and being shot at during his years of service.

Jerry also was an excellent cook, Kimar said, adding Jerry’s grilled dinners and German chocolate cake were popular among his family and friends.

Kimar said it was hard on his family not being able to gather and embrace each other after losing Jerry but the time away from friends and family has helped him be more appreciative of them.

Kimar also said the experience of losing his dad to the virus has made him more appreciative of his own health, life and community.

“I remind others to keep active and be conscious of their health,” Kimar said. “Just eat the right food and stay active and your immune system will fight this off, even though we live in the South and there are a lot of tasty soul foods here. Also, slow down and take the time to appreciate others.”

Jerry, Kimar said, had been in and out of the hospital for five or more years with underlying heart and breathing problems.

Jerry was diagnosed with pneumonia approximately a week and a half ago, Kimar said, and later with COVID-19 and was hospitalized for the final week of his life.

Kimar couldn’t visit with his dad while he was sick because he would have risked exposing others at home to the virus, he said.

“The day that he passed, the hospital allowed his immediate family to come up to see him — his spouse and his kids,” Kimar said. “They gave us a special gown, gloves and a mask. We weren’t inside the room with him but could see him through the glass.”

Kimar said he is adjusting to life in the era of social distancing and staying at home.

“I’m taking advantage of the new normal,” Kimar said. “This time has allowed me to read more and spend time with my mother. … I’ve never seen anything like this virus before and even generations before me have never dealt with anything like it. I’ve learned to appreciate people’s presence more. A lot of people can be sitting next to someone in person but mentally be somewhere else, either with their eyes on their phone or on a screen. … Isolation is important, because it forces you to do more self-care, exercise, clean house and reflect.”