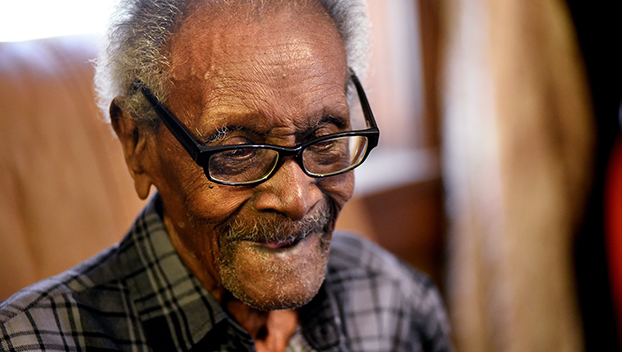 Retired barber Jessie Winston was 109-years-old when he died at his home Wednesday. He was likely one of the oldest living people in Natchez. (File photo / The Natchez Democrat_

NATCHEZ — The world lost an invaluable source of information about life and, in particular, life in Natchez when Jessie Winston died Wednesday, friends and family said.

The retired barber and lifelong storyteller was 109 years old when he died at his home. Born on Christmas Day, 1910, Winston was likely the oldest living person in Natchez and, possibly, Mississippi, Winston’s youngest daughter Helen Winston said.

“He was the best barber in Natchez, back then and up until the time he stopped cutting hair,” Helen Winston said.

Working until he was 101-years-old, Jessie Winston enjoyed cutting hair and sharing stories in the small barbershop behind his house on East Franklin Street.

“I remember him sitting back there with customers talking about boxing, baseball, and stuff like that,” Helen Winston said.

Living with her father for 63 years, Helen Winston said she loved hearing her father’s many stories after he returned to the house from work.

“He loved sitting down and telling people stories,” Helen Winston said. “He also had a lot of jokes to tell. He would keep me laughing.”

Dr. Freda M. Lawrence said she was captivated by Jessie Winston and his many stories when they first met in 2010.

“They would come to the church and sit with their father,” Lawrence said. “And in talking with them, I met Mr. Winston.”

Lawrence said she had never met anyone 100-years-old or older before meeting Jessie Winston.

Almost immediately, Lawrence said she was taken with Jessie Winston’s personality and wealth of knowledge.

“I could have sat and listened to him 24-7 on any subject, about life and about things in the past,” Lawrence said. “He could speak it, and it was clear. He was a talking book.”

In 2018 story, when Jessie Winston celebrated his 108th birthday, Winston recalled living in a time when the roads in Natchez were made of dirt and gravel when people drover surreys on the streets.

“When the sheriff got his prisoner anywhere downtown, he had to walk him all the way back to the jailhouse,” Jessie Winston said.

He also recalled when $4 would buy “more groceries than you could carry” and when traveling to Vidalia required taking a ferry ride across the Mississippi River.

Jessie Winston also recalled losing friends and neighbors after the Rhythm Night Club fire in 1940. More than 200 people died in the fire blocks from Winston’s house.

Listening to his many stories, Lawrence said she felt other people should hear about Jessie Winston.

“I really thought the entire world needed to know about Mr. Winston, his history, the information he had about the city and what he could say about the world,” Lawrence said.

Lawrence helped get the word out, including reaching out to President Barack Obama and First Lady Michelle Obama, who sent a letter to Jessie Winston in 2017, celebrating Winston’s 106th birthday.

Winston framed the letter and hung it in his bedroom.

Helen Winston said her father was good at many things, including fixing cars and building houses.

“When he was younger, we never had to take our vehicles to the mechanic,” Helen Winston said. “Daddy did it all.”

Helen Winston said her father would be remembered for being a good father and a good man.

“He never had a misunderstanding with anybody. He loved everybody to the utmost,” Helen Winston said.

Lawrence said she will always treasure her friendship with Jessie Winston and that her life has been changed for the better as a result.

“I think I really am a better person to have met him, for him to share with me comments about life and about living,” Lawrence said. “I will go forward being a better person.”

In addition to Helen Winston, Jessie Winston is survived by daughters, Diane Butler, Dorothy Winston and Jessie Galvin, step-son Andrew Collins and other friends and family.