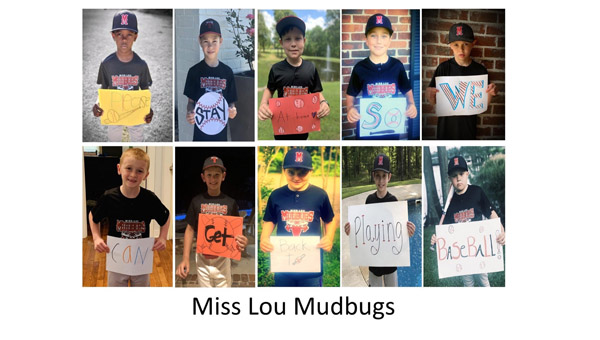 NATCHEZ —The coronavirus has put hold on baseball fields, leaving youth baseball players to find other ways to keep practicing. One Miss-Lou youth baseball team found another way to continue being together virtually.

The Miss-Lou Mudbugs is an 8-and-under youth baseball team that travels to play in tournaments on the weekends.

Mary Ellen Gremillion, Logan Bamburg’s grandmother, wanted the players to stay active, so she came up with the idea of having the players create a collage.

Gremillion said she saw a collage of pictures on a travel baseball Facebook group and wanted to involve the Mudbugs.

Janna Atkins, a mother of one of the teammates said the boys wanted something to do anyway and creating the collage was a great idea.

“I think the collage was a good exercise for the boys to give them something to look forward to doing. The community has seen them grow up and I’m sure the community has missed seeing these kids. There were other families who would travel and see them play.”

The plan came together with a picture of each of the Mudbugs players holding up white signs with one word on each sign.

Altogether the signs spell out: “Please stay at home so we can get back to playing baseball!”

Doug Atkins, head coach of the Miss-Lou Mudbugs, said he had no idea that the players were putting the collage together.

Some of the Mudbugs players have played with each other for three years.

For some of the players, this was the final season where they played in coach-pitch baseball, in which the coaches pitch the ball.

The players who are moving on will play in kid-pitch baseball in the fall, where the kids pitch the ball.

Logan Bamburg, 8, is one of the Mudbugs that will move on to playing in kid-pitch.

With the coronavirus limiting Bamburg’s ability to practice, he said he has found other ways to keep practicing.

“I have been throwing the baseball at this pitching machine and been working on my hitting,” Bamburg said. “I’m working on being a power hitter [one that hits home runs].”

Rivers Atkins, 7, is the Mudbugs pitcher and third basemen.

During this break from baseball, Rivers Atkins said he has been working on footwork drills, pitching and ground balls at home.

Like his teammates, Rivers Atkins said he hopes to play baseball again.

“I miss going to practices, seeing my teammates and having cookouts after practices,” Rivers Atkins said. “I just want to go back with my team and play baseball.”

NATCHEZ — Natchez High’s James Singleton began playing basketball when he was approximately 5 years old. “Basketball is the one... read more