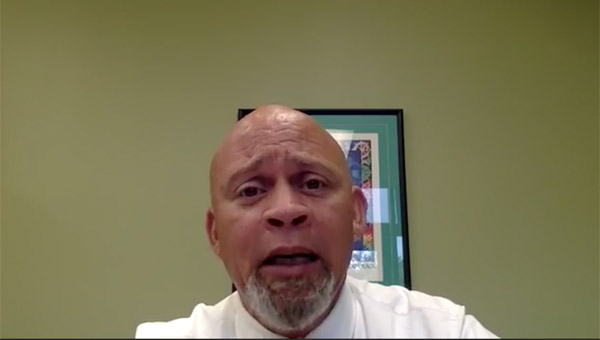 NATCHEZ — Natchez Mayor Darryl Grennell said he would give his Natchez COVID-19 Task Force an A plus for its response to the COVID-19 pandemic.

“We were way ahead of anybody else in the state of Mississippi,” Grennell said of the Task Force he established on Feb. 26 in the early days of discovery of COVID-19, which later became a pandemic on March 11. “Of course there were challenges that we faced early on.”

Grennell’s statement was in response to a question posed to him during a Natchez-Adams County Chamber of Commerce Friday Forum that was streamed live on the chamber’s Facebook page.

Grennell said people early on questioned why he had formed the Task Force, not realizing the potential for the spread of COVID-19.

“As time went by and they saw the spread of the disease and when people were dying, they came back to me and they were apologetic and said, ‘You were right. I’m glad you got ahead on this to put the word out.’”

Grennell, who taught microbiology at Alcorn State University before retiring, said he started meeting with city department heads early on to plan for the potential outbreak.

Grennell also said he wrote a Top of the Morning for The Natchez Democrat approximately 20 years ago about a past pandemic of the bubonic plague and imagined what a contemporary plague might be like.

Grennell said he believes transparency in information about the disease and its spread is important to help stop the spread.

“I think the state is doing the best that it can,” Grennell said in response to a question about the state’s response to COVID-19. “The state department of health has been performing quite a few of the tests. They are overwhelmed in terms of how many tests they can run per day.”

Grennell said some private labs have been running tests as well.

Grennell then related the story of his own test results taking nine days to be returned from a private lab before finally coming back negative.

“All of these labs were just overwhelmed with these tests that they had to run,” Grennell said. “Early on in the pandemic the state wasn’t getting the numbers as expeditiously as possible and that’s why it was a little breakdown.”

Grennell said he believes the state has done well in reporting the information it has and he believes transparency is important in fighting the spread of COVID-19.

In response to a question about reporting outbreaks in nursing homes and private businesses, Grennell said he also believes transparency is important.

“I think the public should know what nursing homes have positive cases of coronavirus,” Grennell said. “It is important for the loved ones who have residents in those nursing homes, whether or not their loved ones, are in a facility where there is a positive case of the coronavirus, so those loved ones can keep in contact with their relatives to let them know. I’m 100% on board with transparency as relates to real numbers and locations and the presence and prevalence of this virus in institutions, even if it is in the workforce. If we have a factory here and there is an outbreak, the public needs to know.”

Grennell said the more information the public has about spread of the virus the better they can protect themselves.

“I believe in being transparent with this whole thing because it lets the public know what they need to do in order to better prepare and to deal with it,” Grennell said.

In bars Grennell said people are more likely to get closer to each other while visiting and therefore have more potential of spreading the virus than people shopping.

“Food, you’ve got to have,” Grennell said. “You have got to have food to nourish your body. In order to have a good healthy immune system the body has to be well nourished so our stores here from our observation have been very proactive. … They sanitize every night. When that store shuts down it is sanitized. That contract company that comes in every night to sanitize, they actually provide EPA certification that the store has been sanitized.”

Grennell said being proactive is key to fighting spread of COVID-19.

Grennell said he is pleased with how Natchez residents are adhering to stay-at-home orders and social distancing.

“At the very beginning of this pandemic it was a major challenge in terms of getting people to comply with the stay-at-home order,” Grennell said. “I think many people out there in the community were not serious about it. People were still gathering and the police department was working diligently and we were doing as much as possible as we could in terms of trying to get the word out in order to educate people. At the very beginning I don’t think a lot of people took it very seriously. When we started to see the first fatalities and saw the numbers for Adams County it began to sink in to say, ‘Hey, we’ve got to help reduce the spread of this disease,’ so it got better with time.”

Grennell said a couple of weeks ago after the city made yard signs reading “Stay at Home: COVID-19 Kills,” 1,500 to 1,600 yard signs were claimed by residents within two days.

“We had residents calling saying ‘I want a yard sign. We want to help health care workers by helping stop spread the disease,’” Grennell said.

On Friday morning the Mississippi State Department of Health reported 169 new cases of COVID-19 in Mississippi and 11 new... read more