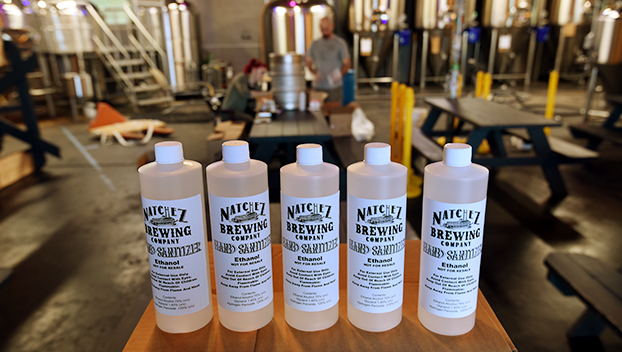 Hand sanitizer may be the world’s most sought after liquid these days and Natchez Brewing Company is doing its part to answer the call.

Natchez Brewing Company owners Pat and Lisa Miller with the help of Lazy Magnolia Brewery on the coast mixed their first batch of hand sanitizer Friday and in one day sold more than a third of its supply.

“A lot of other breweries and distilleries were making it and we kept getting phone call after phone from people asking if we were going to do it,” Pat Miller said. “We decided if there was a need and a demand we were going to do what we could to fulfill some of it.”

Although Natchez Brewing Company is not set up to make the ethanol used in the product, the Millers knew where to find the ingredients to make the sanitizer. Lazy Magnolia Brewery was already making the product and selling it on the coast.

“We teamed up with Mark Henderson and the folks at Lazy Mag. They are bringing in the bulk chemicals,” Miller said.

A blend of ethanol, glycerol and hydrogen peroxide, the product can be used as an all-purpose sanitizer.

“You can use it to sanitize most anything including hands and countertops.” Pat Miller said.

The hand sanitizer will be sold at the Brewery until supplies last. Each 16-ounce bottle is $10.50.

The brewery continues to offer to serve brick oven pizzas during the brewery’s taproom hours. The pizzas can be ordered for pickup at 769-355-2225 or at natchezbrew.com. Natchez Brewery also offers pizza kits that can be made at home. In addition to food, the brewery is also filling 25.4 oz Crowler cans with any of the beers on tap.

Miller said he plans to mix up another 110 gallons next week. A portion of the product will be donated to area healthcare. The rest will be sold at the brewery until supplies last.

Those who bring an empty bottle next week can have them refilled with hand sanitizer for $9.50, Miller said.

Life has changed for most of us who are staying home as much as possible in hopes the COVID-19 novel... read more