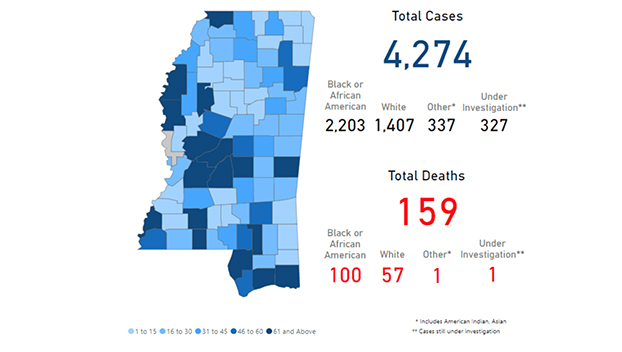 State health officials reported 8 new cases of the virus in Adams County, jumping from 73 cases on Saturday to 81 cases on Sunday.

MSDH reported 300 new confirmed cases of the virus in the state Sunday, bringing the state’s total to 4,274 cases since March 11. It was the 11th day in a row the number of new cases rose by more than 100.

The state reported 7 more people died in the state over the last 24 hours due to the virus, bringing the state’s total number of deaths to 159.

Black Mississippians make up 51.5% of all positive coronavirus cases. But blacks make up 63% of the deaths related to the virus.

The state also tracks the number cases found in long-term care facilities such as nursing homes that are considered high risk due to their residents being in close confines, often being older and often having underlying health issues.

For the sake of reporting, the state considers even a single case of coronavirus among staff or residents of these facilities as an “outbreak” and are tracked by county below.

* One death previously reported in Amite County has been corrected to Wilkinson County.

A Tornado Watch that was set to expire at 7 p.m. for Adams County, Concordia Parish and surrounding areas has... read more