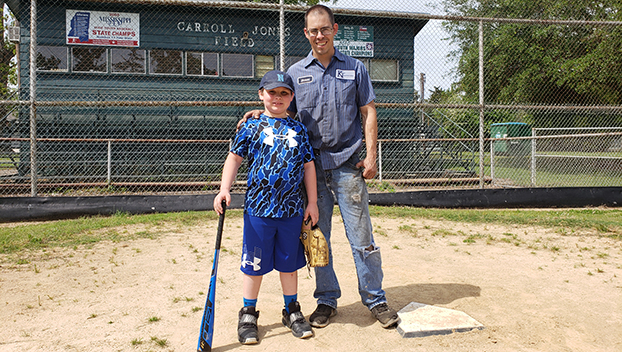 The Dart: There is no place like homeplate for father, son

NATCHEZ — Baseball season may be postponed during the COVID-19 pandemic but that didn’t stop a young athlete from keeping his pitching arm warm at practice in Duncan Park on Saturday afternoon.

Charles Walker Lazarus, a third-grader at Cathedral Elementary School, stood on the pitcher’s mound with his dad, Michael Lazarus, wearing the catcher’s mitt when The Dart landed at Duncan Park on Saturday.

“Strike three,” Michael said, calling out a strike each time the baseball came flying straight down the middle of home plate into his glove.

“I played some in school but he (Walker) plays a lot better than I ever did. I mostly played outfield and benchwarmer,” Michael said, jokingly.

Walker said he and his older brother are homeschooled, which gives him more time with his dad for baseball, fixing up cars and bicycle riding.

“We ride bikes here (in Duncan Park) and in Bluff Park and tried to ride up Silver Street,” Walker said. “… I’m just homeschooled for right now but I’ll go back to school in fourth grade.”

While the sports are put on pause for the pandemic, Walker said his travel ball coach told him to keep practicing to stay in shape.

After several pitches, the father-son duo also practiced fielding. Michael tossed the ball up with one had and used the other to swing the bat and send a few ground balls to Walker in left field.

“We try to practice at least every other weekend if not every weekend while we’re waiting on baseball to start back again,” Michael said.

“That’s what my coach said. ‘Don’t let him just sit around but keep practicing,’” Walker said.

The Concordia Parish Office of Homeland Security and Emergency Preparedness reported a new case of COVID-19 in the parish Sunday.... read more