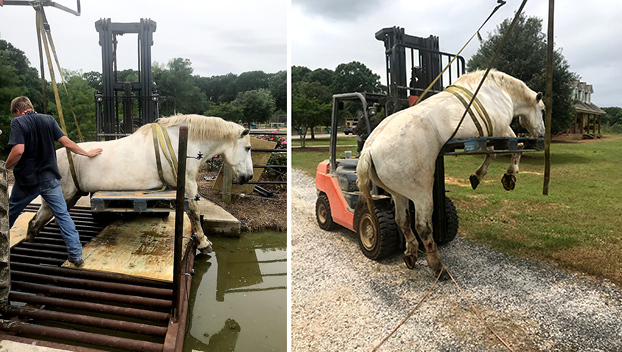 Chad Gamberi checks to make sure a white Percheron horse is stable before its carried safely away. The white percheron was stuck in a cattle guard on Wednesday afternoon on Chad Gamberi’s property. (submitted photo)

Getting a lift: Horse rescued after being stuck in cattle guard

A Natchez man is thankful for the help he received from his friends to save the life of a 14-year-old white Percheron horse on Wednesday.

It took Chad Gamberi, Jason Hennington, Stephen Guido, Chase and Caitlyn Gamberi two hours to get the white Percheron horse loose from a cattle guard the horse’s back hooves got stuck in.

Gamberi said his daughter, Caitlyn, spotted the horse before she was leaving to pick him up from work.

“Without the help of all five people, one person couldn’t have done everything,” Gamberi said. “My son and daughter were comforting the horse and loving on it. Jason was cutting 6 inches from its hooves and Stephen was helping with tying ropes around the horse. Without Stephen and Jason being there, the horse would have died.”

When the incident occurred, Guido said he was eating lunch at The Feed Trough, where Gamberi works, and when he didn’t see Gamberi at there, Guido drove to the Gamberi’s house’

When he learned what had happened, Guido said he offered to cut the horse loose by sawing off the pipes from the cattle guard.

Then Jason Hennington offered to use a forklift to carry the 2,000-pound horse to safer ground. The team secured the horse to the forklift using ropes.

“It was a panic situation because we were worried about the horse falling on us,” Guido said. “Chad needed more help with the horse. If Caitlyn Gamberi never saw the horse, then it would have died.”

After a stressful day, Chad Gamberi said he let the horse stay in a barn.

On Thursday, Gamberi let the horse go, and it ran around in the backyard. Gamberi said the horse is doing fine and it is a bit sore from being stuck.

NATCHEZ — Businesses throughout Mississippi and the Miss-Lou are eying plans for sensibly reopening in the midst of the COVID-19... read more