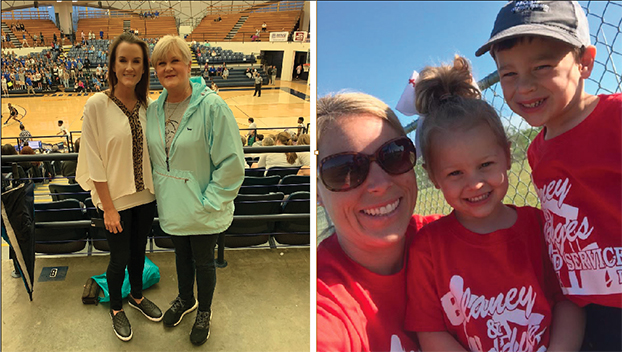 NATCHEZ — Some mothers in the Miss-Lou share a special bond with their children through a love of and participation in sports.

“I wouldn’t forget the day she came into the kitchen and told me she was going to coach an AYA team,” Melanie said. “She said she was going to win a championship. And she did. She laid the foundation for the third-grade team, and they were fundamentally sound. That’s just special.”

The Lady Rebels and Centreville Academy played against each other twice in girls basketball last season. Brandy Hall said she has mixed feelings about coaching against her mother in basketball.

“I would much rather coach with her than against her,” Brandy said. “She taught me everything that I know. When you’re facing someone like that, if anybody can outsmart me, it is my mom.”

With Mother’s Day coming up Sunday, Brandy reflected on her relationship with her mom.

“In my opinion, I think Mother’s Day should be celebrated all year,” Brandy Hall said. “There’s nobody like your mom. Mother’s Day will always be special to me because my mom, and I have a very strong and close relationship. I just know that mom is always going to be there if I get in a bind.”

April Dillon Blaney coaches her daughter, Tinley, and her son, Tucker, in youth baseball and softball in Vidalia.

“Being a mother and coaching gives me the opportunity to be with my children and their friends teaching them the sports I enjoyed most in my youth,” April said. “Seeing my children enjoy what I enjoy first and on the field is heart warming.”

With Mother’s Day being celebrated Sunday, it gives mothers everywhere a day to be celebrated with their family. April said being a mother has always been a dream and blessing for her.

By SABRINA ROBERTSON & PATRICK MURPHY NATCHEZ — Graduation season is upon us, but we are living through unprecedented times.... read more