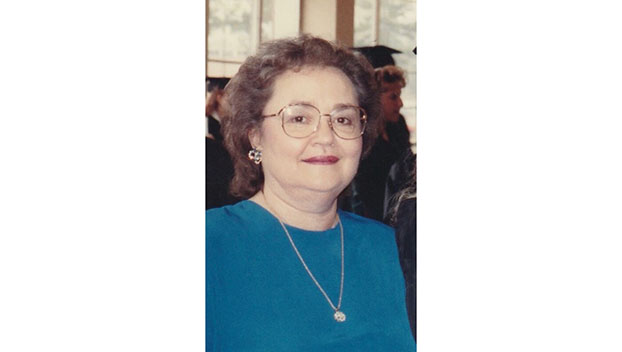 NATCHEZ — Graveside services for Joyce Whitten McManus, RN, MSN, Ph.D., 83, of Natchez who passed way peacefully in her sleep on Monday, May 11, 2020, will be 11 a.m. Friday, May 15, 2020, at Greenlawn Memorial Park Cemetery with Rev. Jon Altman officiating. Services are under the direction of Laird Funeral Home.

Joyce was born in Winnsboro, Louisiana on Nov. 26, 1936.  Her parents, deceased, were Calvin and Jessie Whitten. Early in her life, Joyce and her parents moved to Natchez where she entered the school system and graduated from Natchez High School in 1955. She has one sibling, her sister, Elaine Thomas, who lives in Gulf Breeze, Florida.

In 1954, Joyce met her husband, Leonard Edward McManus, while she was in high school at a local ballgame. They only knew each other for a few weeks before he became a U.S. Marine and was deployed. After two years of writing letters and waiting on his return, they were married on Dec. 21, 1956, shortly after he arrived home. They were happily married for 63 years.

Further education became more important to Joyce as time passed. In 1964, the University of Southern Mississippi added a program in Natchez in associate degree nursing. The curriculum was designed to be completed in nineteen months. In 1966, Joyce and sixteen other students entered the program. She and only three others graduated in 1968 within those nineteen months. In August of 1968, Joyce wrote the national nursing examination to become a registered nurse and passed on the first try. She was selected for a registered nursing position at a local hospital.

Joyce became a long-time employee of Alcorn State University on the Natchez Campus as a member of the Baccalaureate Nursing Program in 1978. She served as a faculty member for various nursing courses, coordinator of the junior nursing courses, and served as the chairperson of the baccalaureate nursing program for fifteen years. There was not a course in the curriculum she did not teach. She was there to see the University be accredited by the National League of Nursing three times and she helped lead the program to a 99% passage rate.

She had positions on various committees on the Alcorn campus, the Natchez campus, and statewide. She was a member of national nursing organizations and traveled widely in the United States to attend national conferences related to nursing.

After more than 25 years in her position at Alcorn, Joyce retired in 2004. She spent most of her time writing, reading, and cooking. Many afternoons were simply spent sitting on the porch with Leonard while drinking a cup of coffee. She was a long-time member of Kingston Methodist Church.

Survivors include her husband Leonard McManus; her daughter Lori McManus Barlow and husband George Barlow of Ridgeland, Mississippi; her son Mark McManus and wife Molly Signs McManus of Brandon, Mississippi. The most wonderful loves of her life are her two granddaughters: Alexandra Barlow and Ava McManus. Her sister Elaine Thomas of Gulf Breeze, Florida; nieces Elizabeth Thomas and Sarabeth Thomas Gordon along with many other nieces, nephews, cousins, other relatives, and friends.