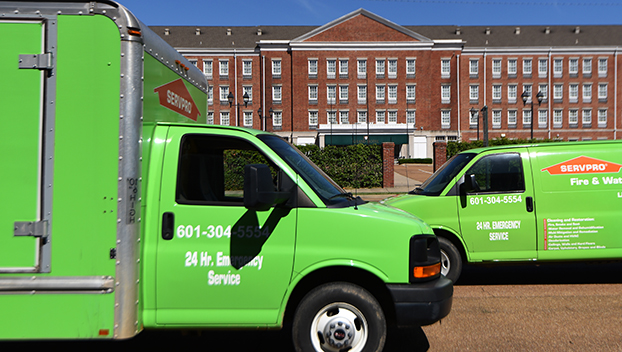 ServPro vehicles sit outside the Natchez Convention Center. The company was hired to clean the convention center, the Natchez Grand Hotel, in background, and the Natchez Community Center. (Ben Hillyer / The Natchez Democrat)

NATCHEZ — The Natchez Grand Hotel, the Natchez Convention Center and the Natchez Community Center are opening for business on Friday, the proprietor said.

Warren Reuther, who owns the Grand and whose company, New Orleans hotels and Consultants LLC, manages the convention center and the community center, said he is excited about the reopenings.

“We had ServPro come out and sanitize all of the facilities,” Reuther said.

Jones said the reservations are for people from Tupelo and different parts of Louisiana and Texas.

“It is a drive market,” Reuther said. “I am encouraged by anything. The word of mouth gets out.”

The Grand, Reuther said, also is the site of meetings in the community.

“Nobody else really does that locally,” Reuther said.

Reuther’s company also owns and operates Monmouth Inn & Gardens and he said they hope to reopen Monmouth on June 1.