The Dart: Bike ride is ticket out of isolation for man 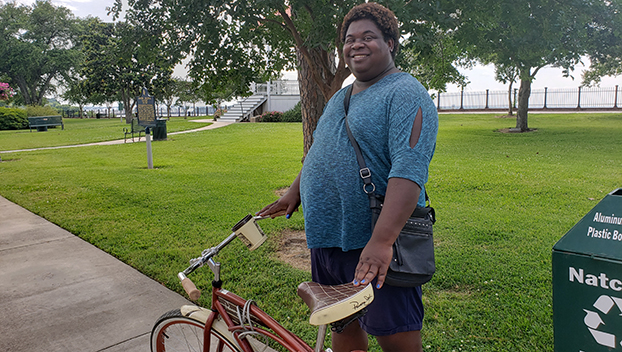 Sentorrio “Tron” Wright spent a Thursday afternoon riding his bike and getting fresh air out on the Natchez bluff. (Sabrina Robertson / The Natchez Democrat)

NATCHEZ — A bicycle ride in downtown Natchez seemed to be the perfect way for one Natchez resident to get out of the house on Thursday afternoon, he said.

When The Dart landed near the Natchez bluff on Thursday, Sentorrio “Tron” Wright was out riding his bicycle to get a little fresh air and sun, he said.

Wright, 35, was born and raised in the Miss-Lou. His dad is from Natchez and his mom is from Vidalia, Wright said.

Before the COVID-19 pandemic started, Wright said he spent most of his spare time out socializing in downtown shops, restaurants, clubs and the Magnolia Bluffs casino, he said.

“I enjoy going around shopping, riding around on my bicycle, hanging out downtown and all of that,” he said. “I go to stores and party all day.”

Since shops and stores started closing in March, Wright said he has spent a lot of time cleaning house, playing videogames and watching movies but gets tired of being inside.

On Thursday, Wright said he decided to put a mask in his bag in case he needed it and to spend a day riding around outside where he could stop and talk to people as he went.