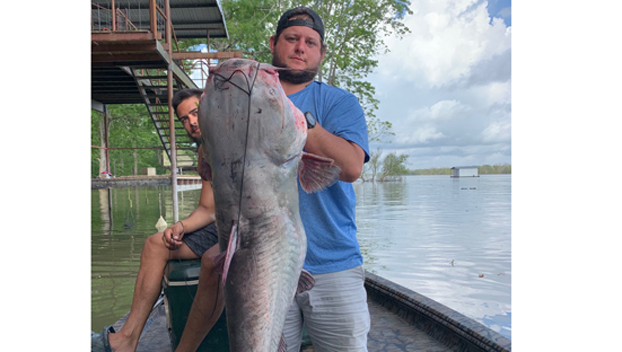 Larkin Smith and his three-person team caught an 86.7-pound blue catfish on May 23 on the Mississippi River near Natchez. (Submitted Photo)

NATCHEZ — A team of three men caught an 86.7-pound blue catfish on May 23 on the Mississippi River near Natchez.

“It was quite the adrenaline rush to catch a once-in-a-lifetime fish,” said Larkin Smith. “It just does not happen very often.”

Smith of Bogue Chitto caught the fish along with team members Shane Moak, Devon Pizarras and Shelby Smith at the third annual Natchez Memorial Day Catfish Tournament. Smith said they used a trotline to catch the blue catfish at the tournament.

The tournament consisted of 14 boats.

Larry Bull, assistant director of Mississippi Department of Wildlife, Fisheries and Parks, said 86.7 pounds is not the state record for a blue catfish.

The record for a trophy blue catfish is 101 pounds and it was caught by Freddie Parker and Brad Smith on May 18, 1997, on the Mississippi River near Natchez.

Larkin Smith said he has been fishing for 17 years.

“This is the biggest fish I have caught,” Larkin Smith said about the 86-pound catfish. “I may never see another fish that size.”