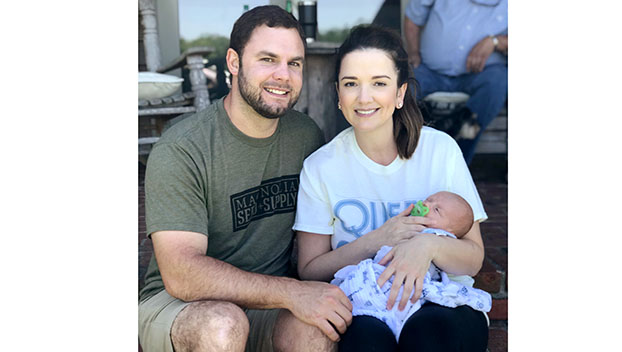 Wyatt and Chelsea Craig, above, were expecting their first child when COVID-19 hit and made the long-awaited arrival of baby Liam a little different than they had planned. Liam came home healthy after being born at Merit Health Natchez on April 17. (submitted photo)

Wyatt and Chelsea Craig tried for five years to have their first child and when they finally did it didn’t quite go the way they had planned.

It was a coincidence that when the last in vitro fertilization was a success the couple was due during the midst of a pandemic, Chelsea said.

“We have planned to have a child for a long time and to have all of our plans suddenly change has been interesting,” Chelsea said.

Chelsea said all of the hospital staff had treated her with kindness and gave her the best care she could’ve gotten from anywhere but there were several signs that this was not a typical childbirth.

When Chelsea came to Merit Health Natchez hospital on April 17 for the arrival of baby Liam, only Chelsea and her husband were allowed in when she would’ve preferred to have both their families there, she said.

Both Chelsea and Craig had to take a brief survey about their health and had to have their heads scanned for their temperature before they could enter, she said.

“It was challenging not having support from family and friends and not having them being there,” Chelsea said. “I had to have a scheduled C-section and Wyatt had to take the reigns and take care of everything. It being so special for us to finally be able to conceive and have a child in the first place and then not have our family there to celebrate with us was the most difficult part of it.”

Chelsea said after her son was born on a Friday, it was just the three of them together in the hospital until they were discharged on Sunday and then they quarantined themselves at home.

Family and friends got to meet Liam through FaceTime but weren’t introduced to him in person until two weeks after he was born, Chelsea said.

“We’ve been quarantined to home since our last doctor’s appointment, which I believe was March 24,” she said. “Adjusting to life at home and not being able to get out and do much has been hard. We took rides in the car and did whatever we could to stay sane.”

Preparing for Liam’s arrival was also harder than it likely would’ve been without the novel coronavirus causing store shelves to be under-stocked with baby essentials, she said.

“We tried to stock up not knowing what to expect but there was a time when the diaper and wipe aisles were completely empty,” she said.

Having a baby in a pandemic wasn’t all that bad, Chelsea said.

Time away from work before Liam was born was more time for the couple to get ready for his arrival.

Chelsea said she was given doctors’ orders to self-isolate until it was time for Liam to be born. After the birth was also an intimate moment that the little family had been able to share with just the three of them — Craig, Chelsea and Liam, she said.

“If we could have changed anything it would have been to have our family with us, but even the time at home before the birth was a time to prepare and have time for us to spend with each other,” she said. “It was nice to have that moment with just us three and two days (in the hospital) to realize that our dream of having a child had just come true.”

Jasper Davis a blessing amid COVID-19

For another Natchez couple, a COVID-19 birth wasn’t very different from the birth of their first son before the pandemic.

Jasmine Morris and Darius Davis had their second son, Jasper Davis, on May 9 at Merit Health.

Davis said when he first heard about the virus, he thought at first that it was no different than the flu or any other strand of virus and that it would quickly die off.

When he began hearing about the number of people who had died with the disease, Davis said he realized COVID-19 was different and became fearful that he could spread the infection to his newborn son without realizing he had it.

“The virus had different symptoms for everyone,” he said. “My biggest fear was giving it to the baby if I had it. … When I come home I enter through the back door and immediately strip off my work clothes and jump in the shower.”

However, when Jasper was born there had been very little difference between his arrival and the arrival of their first son Dylan, who is now 3 years old, Davis said.

“The only difference was not having our family there and of course the usual procedures when you enter the hospital,” he said. “We were concerned because the only patients there would have been COVID-19 patients but the hospital was pretty much empty. Like when you walked out of your room into the hallway, it felt like we were the only ones there.”

Morris said she had been considering a home birth because she had been worried about having Jasper where she knew others had been sick but was grateful for the care they’d received from the labor and delivery nurses.

“It was very different not having our family there with us,” Morris said. “We were looking forward to having our families there and we didn’t have the opportunity to have a baby shower because couldn’t be around a lot of people.”

Jasper is nearly a month old now and has only seen other parts of his family from a digital screen during FaceTime, Davis said.

“We haven’t allowed anyone to come over. Jasmine is really strict on that and I don’t blame her,” he said. “… We’re grateful that the hospital wasn’t packed and that we were able to have Jasper there and not at home. … I didn’t panic and for me personally, it seemed like everything was alright.”

NATCHEZ — Natchez voters will go to the polls on Tuesday to cast ballots in the municipal Democratic Party primary... read more