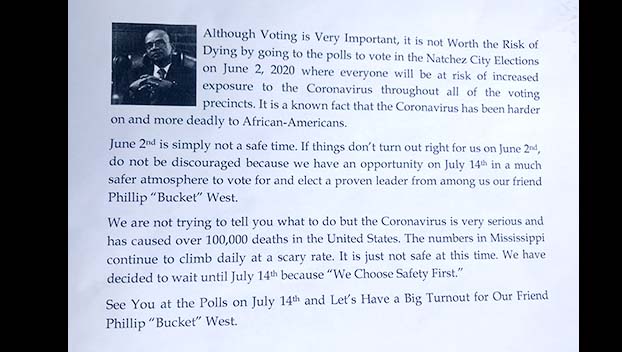 Mayoral candidate: I did not authorize ‘bogus’ flyers found in Natchez neighborhoods

NATCHEZ — Independent candidate for Natchez Mayor Phillip West said flyers disseminated in his name are “bogus” and the work of “a very deceitful person.”

Residents in downtown Natchez and other neighborhoods discovered the flyers in their yards and in their mailboxes Monday evening.

One of the flyers featured a photograph of West and was made to appear as if it were campaign material distributed by “Friends of Phillip West.”

The flyer asks voters to avoid voting in Tuesday’s Democratic Primary because of the dangers posed by COVID-19.

West is not on the ballot for mayor Tuesday. He and independent candidate Richard Branyan will face the winner of Tuesday’s Democratic primary — either Tony Fields or Dan Gibson.

“It is a known fact that the Coronavirus has been harder on and more deadly to African-Americans,” the flyer states. “June 2nd is simply not a safe time. If things don’t turn out right for us on June 2nd, do not be discouraged because we have an opportunity on July 14th in a much safer atmosphere to vote for and elect a proven leader among us as our friend Phillip ‘Bucket’ West.”

West said he was inundated with calls starting before 5 p.m. Monday from family and friends alerting him about the flyer.

“That is bogus material,” West said. “I have not authorized anyone (to make the flyer).”

West said he encourages everyone to go out and vote in Tuesday’s municipal election.

A second flyer was also discovered by other residents titled “Trash.” The flyer allegedly written by a “young black person” discusses the presence of “white trash,” “black trash” and “political trash” in the community and lists a series of local community members as being corrupt. The letter does not seem to support a particular candidate and doesn’t mention Tuesday’s election.

West said he had not seen the second flyer, but heard from others who had found it in their neighborhoods.

West said he suspects whoever wrote both flyers was interested in “character assassination” and was only trying “to be divisive in the community in a time when we don’t need divisiveness.”

“The person who sent out these flyers is a very deceitful person,” West said.

NATCHEZ — A Natchez woman is being held with no bond on an aggravated assault charge after police said she... read more