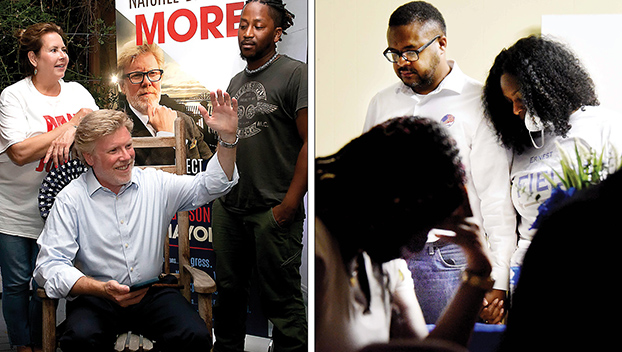 At left, Candidate Dan Gibson anxiously awaits results Tuesday night with friends Ken Curtis and Marla Toman at his house on Washington Street. (Courtesy of Bill Barksdale) Tony Fields holds the hand of his wife Nita as they pray with supporters during his election party at the Business and Civic League Office on Martin Luther King Jr. Street. (Ben Hillyer, The Natchez Democrat)

NATCHEZ — Natchez residents went to the polls Tuesday to cast ballots in the Democratic Party primary race for municipal offices.

By the end of the day, however, all of the contested races — including the mayoral contest and two of three contested aldermen seats — were too close to call as some 700 absentee ballots are yet to be counted.

In the mayoral race for the Democratic Party nomination, candidates Tony Fields and Dan Gibson were separated by a 112-vote margin, which could easily change once the 700 absentee ballots are added to the mix.

“I feel good about where I am in the race,” Fields said shortly after he addressed his supporters about the status of the race with only a slim margin between the two. “I just can’t wait to see what the numbers come out to be when the absentee ballots are counted. It has been a good race. Good clean race. Two guys who just want what is best for Natchez. I think no matter how it comes out the city will be in a better place. This is my home I want to see us be the best version of Natchez that we can be.”

Gibson sat in a rocking chair on the front porch of his bed and breakfast, Garden Song, surrounded by friends and supporters.

“We’ve had a wonderful day,” Gibson said after the votes were counted. “We are feeling good. We are excited that we had a good turnout. We feel real good about the day. We really appreciated the great response we got from people of both the African American community, the white community, people who told us they normally vote Republican but they turned out to vote today, and it just seems to me that today went beyond all of those divisions. We saw in every box support for our call to have Natchez come together. I think Natchez is ready to come together and move beyond all of those divisions that have taken place in the past, and you see the vote reflecting that.”

Gibson also said he is happy the race was a clean race.

“May the will of the people, whatever it be, be the best for Natchez and we will support it,” Gibson said.