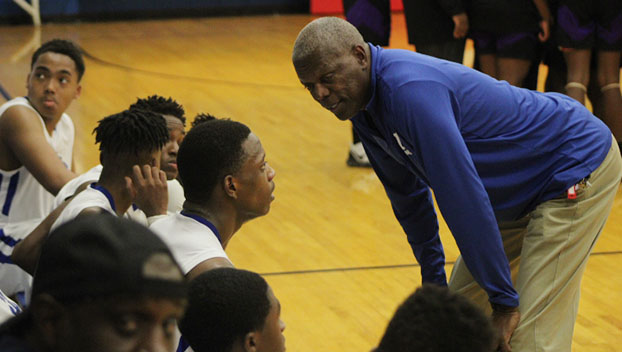 Robert Sanders talks to his players during a game in the 2019-20 boys basketball season. (Patrick Murphy, The Natchez Democrat)

VIDALIA —Robert Sanders has Vidalia High School in his blood.

He graduated from Vidalia High in 1972, began coaching the Vikings boys basketball team in 1991 and taught Physical Education in 1991.

After 28 years of coaching and teaching at Vidalia, Sanders said he is retiring.

“With the season being uncertain I decided to retire now,” Sanders said. “For right now I’m going to take it easy and I’m sure I will get back to something. I have no immediate plans.”

As a new Vikings head coach, Sanders said the first three years were a learning curve for him and he saw improvement from one year to the next.

“Each year was a little bit better,” Sanders said. “One of the positives my first three years was that my team never looked the same in the second semester as compared to the first semester.”

One of the biggest achievements for Sanders came in the 2009-10 season.

In the 2008-09 season, the Vikings were one win away from winning the Louisiana High School Athletics Association Class 3A State Championship game. Vidalia High lost 75-61 to Richwood High School.

In the 2009-10 season, the Vikings played in the Class 3A State Championship game again.

“We saw that we made it all the way in 2009 and seen where we needed to improve,” Stewart said. “We were out on a mission in 2010 and never thought of any team that was close to us. It was no disrespect to other teams, it was just the way we were as a unit. We were hungry and we were focused.”

The Vikings won 82-59 over Carroll High School to win the Class 3A championship.

Ellis said he knew Sanders before he even came to high school.

“I knew him since I was in kindergarten. He was more than just a coach to me,” Ellis said.

Currently, Ellis is the head coach of the Delta Charter School Storm boys basketball team. Ellis said he learned how to be calm and laid back from Sanders, a quality he puts into his coaching style.

“At times Sanders got on you, but he was mostly calm,” Ellis said. “He was like a Phil Jackson type of coach. For the most part, Sanders would not hound you for mistakes. That’s a good quality to have.”

A year after Ellis graduated from high school, Vaughn scored 50 points in a game against Davidson High School in the 2000-01 season. Vidalia won 119-54.

Vaughn went on to play at Southern University after graduating from Vidalia. He said Sanders taught him how to grow up.

“I had a great experience at Southern due to Coach Sanders and I could always call him and ask for advice,” Vaughn said. “That was a great feeling that I could call him. He taught me a lot besides basketball. That’s why I’m successful right now. It was more than basketball with him. He told me to make sure to finish school.”

Altogether, the Vikings made the LHSAA playoffs 20 times out of Sanders’ 28 years of coaching. Sanders finished his coaching career with an overall record of 457-318.

Bernie Cooley, principal at Vidalia High, said Sanders was well ingrained in the Vikings, from Special Olympics to driving the bus for the football team.

“You can’t say enough good things about Coach Sanders. He was one of a kind,” Cooley said. “He’s been a great mentor as a coach and teacher. As far as it goes for me, I could not have asked for a better teacher and better coach. He’s one that cannot be replaced and we are going to miss him greatly.”