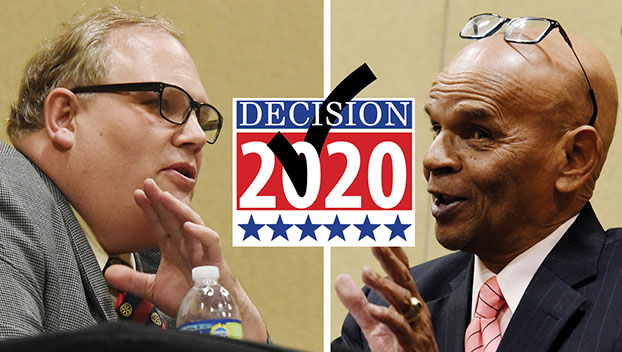 Branyan, West shocked by results of Democratic primary; deciding next steps in run for mayor’s office

NATCHEZ — Two independent candidates for Natchez Mayor said they were surprised by the results of last week’s Natchez Mayoral Democratic Party primary election and they are reassessing their campaigns before the July 14 general election.

“I was very surprised by the results, and we are going to assess where we are and what is next for our campaign,” said Richard Branyan, independent candidate for Natchez Mayor.

Independent Natchez Mayor candidate Phillip West said he, too, did not foresee Tony Fields’ loss to Dan Gibson in the Democratic Party primary.

“I could not anticipate that Mr. Fields would not be victorious at the (end) of the primary,” West said Friday. “I am still thinking about what I will do or what I will not do. As I said, I am in more of a shock because I had not anticipated on having to consider seriously having to make a run myself.”

Although the Democratic Party primary was Tuesday, the results did not come in until late Thursday afternoon as ballot counting was complicated by a high number of some 700 absentee ballots that were cast due to the COVID-19 pandemic.

When the votes were finally tallied, Gibson, with 1,980 votes to Fields’ 1,795 votes, emerged as the winner to become the Democratic Party nominee for the Natchez Mayor’s race.

No Republicans qualified to run for the seat.

Two independent candidates, Branyan and West, however, did file to run for the mayor’s seat in the July 14 general election.

West filed his qualifying papers at the last minute before the city clerk’s office closed on Feb. 7 which was the last day to file for this year’s Natchez municipal elections.

West, a former Natchez mayor filed to run as an independent even though he has traditionally run for offices as a Democrat.

“I’m in the race hopefully, temporarily,” West said at the time. “I want to be able to see who comes out of the primary and what they are offering.”

West also said at the time he would drop out if he were satisfied with the winner of the primary.

“My major goal was to try to be a part of the discussion and hopefully the best person would come out of the race with a similar vision as I have been working on for over 50 years in Natchez,” West said Friday.

West said he believes Natchez has made some steps forward.

“I was hoping that we would have someone to come out of the primary who I would have felt could really continue to move us forward in a more progressive way,” West said. “I have never run for office, any office, over the 50 years I’ve been involved because of anything other than thinking there was something that I needed to do in order to move us beyond my teenage days and young adult days in Natchez, Mississippi, where decisions were always being made that are important to the growth of the community based on race and not on what is right or wrong. I’ve been trying to help the community get beyond that.”

West, who is also a member of the Natchez-Adams School Board, said he has been involved in many controversies over the years.

“I’m not perfect but I do know that there are certain things that we have to be able to confront,” West said. “We have to be educated in this community on what the real solution is to some of our problems and all of us are connected.”

West said he was not shocked by the defeat of long-time Ward 1 Alderwoman Joyce Arceneaux-Mathis but he was disappointed by her defeat to Democratic challenger Valencia Hall.

“I know, and I knew, that she was being targeted politically . . . I thought it was possible she was going to be vulnerable,” West said of Arceneaux-Mathis’ loss. “I was not shocked at that. I was disappointed but I was not shocked.”

West said Arceneaux-Mathis’ experience would be missed on the board.

“We have gone from the person with the most experience and knowledge and background on the board to basically having for the most part, most people who will be there, with very limited experience, background and involvement in the community,” West said. “I’m not saying they are not good, decent people, I’m just saying that’s what her defeat has done thus far.”