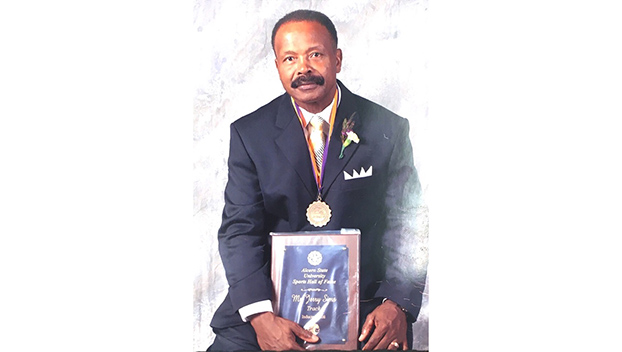 It’s been 50 years since the Alcorn State University Track & Field school record in the indoor 60-meter dash was set.

That record time of 6.69 is still held by Jerry Sims from 1970. It’s one of two school records that he’s part of as he ran the stretch leg of the 4x100m relay team that broke the outdoor school record with a 40.20 time, which still stands today.

“I’ve never liked getting beat. No matter what I do in life, I put in 100 percent or else I won’t do it at all,” Sims said. “I’m proud of what I did on the track, but it isn’t what I’d put at the very top of my personal achievements. My track records are more of an inspiration of what a person could do being the underdog and if they really work towards something.”

Sims was inducted into the Alcorn A-Club Sports Hall of Fame in 2008.

Although he was ultimately honored for his accomplishments on the track, Sims first arrived at Alcorn in the fall of 1969 on a football scholarship as a halfback. The Hazlehurst, Mississippi native was recruited by legendary head coach Marino Casem out of Parish High School, where he lettered in football and was a state champion in the 100-yard dash in track & field.

Upon arrival, Sims did not compete with the football team and left school after a personal decision.

“I practiced with the football team, but at the time I decided I just didn’t want to play anymore. I may have made a mistake by not sticking with football, because I believe I would have had a good chance at being drafted. If I could go back in time, I would have played football. I made a bad decision,” Sims said.

Sims came back the following semester in the spring of 1970 and asked track & field head coach Grant Dungee III for the opportunity to run sprints for Alcorn. Dungee gave Sims a chance, and it quickly paid off. As a freshman, Sims was able to show his prowess in the outdoor season and was granted a track & field scholarship the following year.

“I asked Coach Dungee if I could tryout for the team, and he said ‘sure come out’ and there wasn’t any hesitation. He observed me and I also became close friends with the members of the team,” Sims said. “During the summer of 1970, I trained as hard as I possibly could. When I returned to the University that fall, my mind was made up that I wanted to excel in track, and everything started to come together after that. I trained and trained and trained. I practiced before practice and I practiced after practice.”

In Dec. 1970, Sims and teammate Willie McGee were invited to compete in an exclusive indoor competition held at Madison Square Garden. The duo flew up for the meet to compete in the 60-yard dash, becoming the first-ever Braves to race in New York. Sims finished in fourth-place after running against the top athletes in the country from Power Five schools.

In Feb. 1971 at a meet hosted by Northwestern State University, Sims and his close friend McGee tied the indoor world record in the 60-yard dash with a time of 5.9. Despite the SWAC not having an indoor championship until 1976, Sims and McGee were considered the fastest in the league and also the state of Mississippi.

“Willie and I really brought a lot of attention to Alcorn track. We overcame a lot of adversity. We didn’t have an indoor track to train on, and so we just used E.E. Simmons Gym. We would run all over that gym,” Sims said. “It was similar in the outdoor season because we didn’t have an outdoor track either. We would just train on the grass. We also didn’t have uniforms until the end of my time at Alcorn. They gave us basketball hand-me-downs, and those were the jackets we wore.”

Sims cited the Drake Relays, Kansas Relays and Texas Relays as some of his most memorable meets of his career, in addition to Madison Square Garden. Dungee was selected by the AAU as the international coach for tours that represented USA, and thus Sims had the opportunity to run in a USA uniform.

“We traveled all over for track meets, but I honestly don’t feel we were ever properly recognized. Alcorn would always hold an athletic banquet near the end of the spring, but we were never able to attend because we were competing. I don’t think our track team ever got the recognition we deserved. Actually – let me back track – I don’t want to say ‘I don’t think so’ because I know so.”

After school, Sims secured a job at Industry Telephone and Telegraph (ITT) in Fayette, Mississippi. He’s lived in Fayette ever since. After working for ITT, Sims returned to Alcorn and worked as a fixed assets manager for 35 years from 1979-2014. He retired from Alcorn in 2014. He’s the owner of Mr. Sparkle’s Maintenance Service LLC for 37 years and has contracts with corporate America including Krogers, Kmart, J.C. Penney and Southwest EPA.

“Any person can be successful at anything they do if they really work at it, and I try to convey that message to younger people and inspire them. Especially track & field athletes because it’s a sport where you have to be disciplined and dedicated. Just being on the team is not good enough,” Sims said. “Through all of the things that have happened in my life, God has made me a productive person. I’ve demonstrated leadership and I have a drive to complete any task. I won awards on the track, and then was honored as the best property manager in the state of Mississippi. I won every award that the state auditor could give. The lesson is that no matter how hard life gets and no matter how curvy the road can become; you must constantly work to get better. I have had set backs, but I’m a perfect example of what a person can achieve if you never give up.”