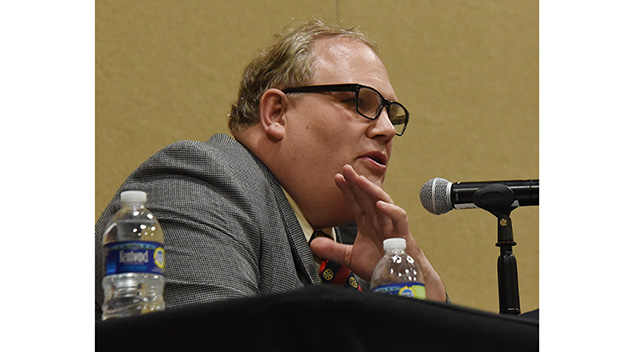 “The time has come to formally announce that I am withdrawing from the Natchez Mayoral Race,” Branyan wrote in the post. “I waited to see if Phillip West would formally commit to running but he never has. I tried to call him the last couple of days and has not returned my calls.”

West an independent candidate is now the only candidate who will face Democratic Party nominee Dan Gibson in the July 14 general election.

Friday afternoon, West was working along side Gibson at the Adams County Safe Room helping hand out free food to people as part of a Seeds of Change charitable food distribution.

West said he has seen Richard Branyan’s social media posts announcing that he was dropping out of the race and that Branyan’s announcement would have no effect on his campaign or decision to stay in the race.

“I am 95% in the race,” West said, adding there was a “very slight chance” that he would drop out, but that he was committed to continuing the campaign. “I am the best person for the job and I know that is the truth,” he said.

As of Friday afternoon, Branyan had not submitted paperwork with the city clerk’s office to have his name removed from the list of candidates, said Servia Fortenberry, Natchez city clerk.

Natchez Municipal Election Commission Chairman Larry Gardner said Branyan would have to file a written statement with the city clerk’s office by Tuesday, June 23, to keep his name from being included on the July 14 general election ballots.

Branyan said he intends to file the necessary paperwork by the Tuesday deadline.

West filed his candidate qualifying papers at the last minute before the city clerk’s office closed on Feb. 7 which was the last day to file for this year’s Natchez municipal elections.

West a former Natchez mayor filed to run as an independent even though he has traditionally run for offices as a Democrat.

“I’m in the race hopefully, temporarily,” West said at the time he qualified on Feb. 7. “I want to be able to see who comes out of the primary and what they are offering.”

West also said at the time he would drop out if he were satisfied with the winner of the primary.

Following Gibson’s victory over Democratic Party candidate Tony Fields in the June 2 primary, West said he was still trying to decide whether to stay in the race.

“I could not anticipate that Mr. Fields would not be victorious at the (end) of the primary,” West said after the results of the June 2 primary. “I am still thinking about what I will do or what I will not do. As I said, I am in more of a shock because I had not anticipated on having to consider seriously having to make a run myself.”

Fortenberry said Friday afternoon she had not heard from West on whether he will stay in the race.

Branyan commended both Fields and Gibson for running clean campaigns.

“I would like to thank everyone who worked on my campaign and gave contributions,” Branyan wrote on social media. “This was not my year. I would like to congratulate Dan on an impressive win in the Democratic Primary against Tony Fields. Dan and Tony ran a clean positive race.”

Branyan threw his support behind Gibson in the general election.

“Natchez needs a change in leadership, we need fresh ideas,” Branyan wrote. “I believe Dan Gibson has the enthusiasm and drive needed to be a successful mayor. I like Phillip West, but during his term as mayor he failed to correct many of the problems we have in Natchez. I think it is time to elect a mayor who will work full time for Natchez.

“I have talked with Dan and he has my full support. I hope you will join me in my enthusiastic support for Dan Gibson in the General Election on July 14th.”

Branyan said he would stay involved in local politics regardless of who wins the election.

“Whoever wins I will stay involved working to make Natchez a better place to live and work,” Branyan said.

NATCHEZ — Natchez area veterans are mourning the loss of Donnie Verucchi, a friend and comrade they said did much... read more