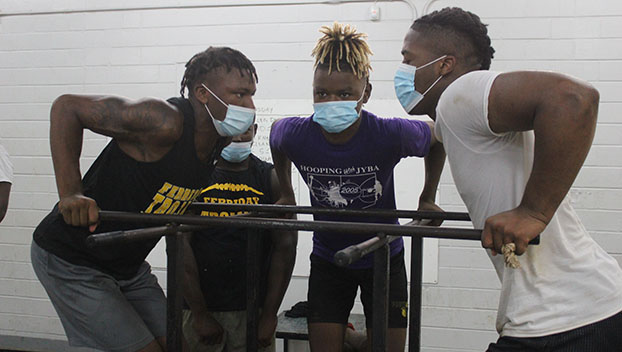 NATCHEZ — Inclement weather could have easily played havoc with several local high school football teams that are trying to practice outdoors, but for the most part it has not been as bad as it could have been.

Adams County Christian School, Cathedral High School and Vidalia High School have each only had one day affected by either heavy rain, gusty winds or lightning.

“We did some practice outdoors Monday and Tuesday. We didn’t practice (Thursday),” said David King, ACCS head coach. “We didn’t have practice last week. We’re off for our mandatory practice next week so the kids can enjoy the Fourth of July.”

King said that the Midsouth Association of Independent Schools requires all schools to have a mandatory week off during the summer, so he chose the week leading up to the Fourth, which is this Saturday, to have his team take off from practice.

“I’m real pleased with the effort these young kids have put in,” King said. “Hopefully we can return to practice soon and that the coronavirus doesn’t get us.”

Cathedral High School head coach Chuck Darbonne said his team had to move one of his practices indoors earlier in the week.

“We ended up moving one of them, either Monday or Tuesday,” Darbonne said. “We had split into four groups between the weight room in both gyms so we could do running exercises (there) and the classroom so we do some football talk. We talked about schemes and football knowledge in the classroom.

“We had practice outdoors three of the four days this week. We focused on running, sprint work and conditioning. We were just unfortunate when it rained. We didn’t go outside at all that one day.”

As for Vidalia High School, head coach Michael Norris said the only day his team got chased indoors to the gym was last Monday.

“We did the same stuff – speed and agility. But other than that, we’re doing the same stuff. We’re doing skill work,” Norris said. “We’re not working on grass right now. I wish we could go outside (on the field). We’re not doing any football stuff until after the Fourth of July.”

Norris said for now his players have been lifting weights as well as the speed and agility drills, doing so in separate groups.

The Ferriday High School Trojans also practiced inside this week as well. On Friday, the Trojans were lifting weights. During practice on Friday, Elijah White, Sharone Finister and Larin Stampley were doing dips off of bars. White said it is good to lift but he wants to play outside.

“We still have to be going outside and working on the field,” White said. “We have to get our conditioning in and get ready for the season.”

Area football coaches preach the sport and the Gospel

NATCHEZ — On the sidelines of any sport, some Miss-Lou coaches can be seen coaching their respective teams. But on... read more