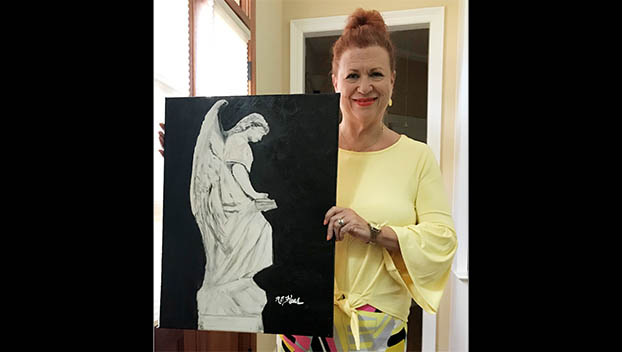 NATCHEZ — Natchez artist Mary Flach knows when it is time to sit down and paint.

The moment she heard about the recent vandalism of the Turning Angel monument in the Natchez City Cemetery was one of those times.

“When it happened, it really kicked me in the gut,” Flach said.

With thoughts of the statue on her mind, Flach knew she had to look to her creative side to help make sense of her feelings.

“When I am happy or concerned or have all of those different emotions I sit down to paint,” Flach said.

The statue, Flach said, was one of her favorite landmarks and was often visited by her family.

“I had a picture of her in my office all those 20-something years,” Flach said referring to her office at Belk before she retired as store manager.

Sitting down in front of the canvas to paint her rendition of the angel statue, Flach said she had a sense that she could use the painting to help raise money for the restoration and repair of the Natchez landmark.

Inspired to paint, Flach sat down and painted late into the night. She completed the acrylic painting of the statue in 12 hours.

Flach said she wanted to first see how her painting came out before she committed to anything. The initial response from family members was overwhelmingly positive, Flach said.

“My husband said, ‘Mary I am telling you that that is your best piece of art yet,” Flach said.

Her son had a similar response.

Encouraged, Flach decided to have signed and numbered prints made to sell. A sizable portion of the money raised from the sale of the original painting and the 12-inch-by-18-inch prints will go to the restoration of the statue.

Each print will be sold for $50. Those interested in buying a print can email Flach at marybflach@gmail.com or leave a text message at 601-597-2124.

Flach said she has also received requests to make notecards featuring her painting of the angel. If she gets enough requests for notecards, Flach said she will sell cards and also donate a portion of the proceeds.

Other work by Flach can be viewed online at colorfuldaughter.com.

In  just a few short days, Flach also sold the original and hopes that the prints will also be popular.

“I just know there are so many people that care about the Turning Angel, not just in Natchez, but all over the world,” Flach said.

Flach said she hopes she can raise a minimum of $5,000 to give to the restoration effort, but that she doesn’t know what the response will be.

“I don’t know how many prints I can sell. It could be huge or nothing,” Flach said.

Whatever the response, Flach said she hopes she can play a role in bringing back one of Natchez’s beloved treasures.

“These are unusual times we find ourselves in,” Flach said. “Often, it takes something like this to happen for us to realize how much we appreciate what we have. One of those things is our beautiful Turning Angel.”