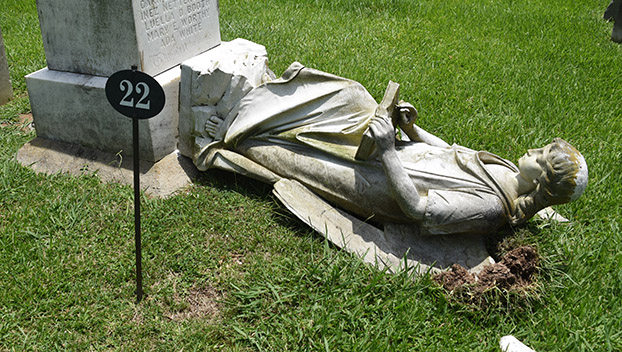 NATCHEZ — Donations are coming in every day, Natchez City Cemetery officials said, to help fund restoration of the Turning Angel statue that was damaged last week in an apparent act of vandalism that knocked the monument off its pedestal.

“We are getting a good bit (of donations),” said Elise Rushing, president of the Natchez City Cemetery Board. “I’m not sure how much yet, because we get checks every day.”

Rushing said contributions to the angel’s restoration could be made out to Natchez City Cemetery/Turning Angel Fund, P.O. Box 1738, Natchez, Mississippi 39121. Also, Rushing said, cemetery board members are in the process of creating a Go Fund Me internet account to accept contributions and she is hopeful the page will be set up by the weekend.

The Turning Angel is a landmark of Natchez and has stood watch in the Natchez City Cemetery over five young girls who perished in a 1908 explosion at the former Natchez Drug Company since the drug company’s owner placed the statue in honor of the victims.

The angel statue has been dubbed the “Turning Angel” because it appears to turn at night as cars drive past it along Cemetery Road.

Natchez City Cemetery workers discovered the statue had been knocked off its pedestal when they returned from lunch at approximately 12:30 p.m. June 23.

Natchez Police arrested Austin Petty, 20, of the Crosby-area on Friday and charged him with felony malicious mischief over $25,000 and a $50,000 bond. The charges could result in up to a $10,000 fine and 5 years in jail, officials said.

Police said surveillance video showed Petty arrived at the cemetery shortly after 1 a.m. on June 23 as a passenger in a white SUV with other occupants.

Petty allegedly jumped out of the vehicle and went to the Turning Angel as another passenger yelled at him not to do anything stupid.

Armstrong said Petty then climbed onto the statue and began to rock it when it fell over.

Armstrong said he had no information on any potential motive Petty might have had in turning over the statue other than it appeared to be a stunt that went too far.

“He just went too far with him up there pulling and pushing,” Armstrong said, adding that someone speculated that Petty might have wanted to see if the Turning Angel actually turned, but Armstrong said he had no evidence of that. “He said he thought it was one piece and he was playing around with it, rocking it but he was not trying to knock it down and he is sorry. If it were all one piece it would have been all right.”

Armstrong said it could have been worse if the statue had actually fallen on Petty or anyone else.

“Just that top piece is extremely heavy,” Armstrong said. “I could not budge it when it was lying on the ground. No telling how much it weighs. It is way up in the weight I can tell you that. If it had fallen on him or anyone who was in the area it could have been a serious injury or death if it had fallen on somebody. After the fact, he was sorry about it.”

Rushing said the cemetery board is still searching for the right company to do the restoration on the angel.

“We have some companies that are coming in to look at the angel and make proposals,” Rushing said.