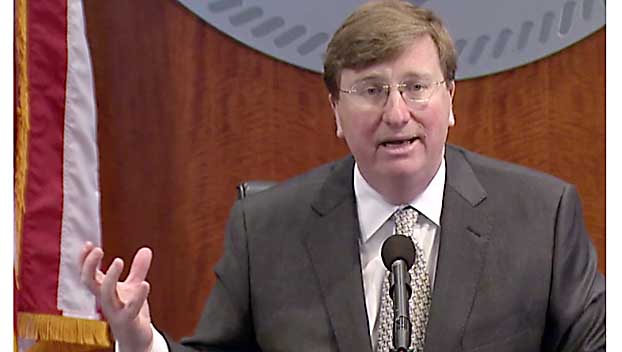 Mississippi Gov. Tate Reeves said Wednesday the state is pausing its efforts to reopen the economy after a recent surge in new reported coronavirus cases.

“Things are getting worse, not better,” Reeves said at a news briefing.

Mississippi reported a peak of 1,092 reported cases of the virus in a single day last week. The state Health Department has consistently reported 450 to 700 new cases each day since. On Wednesday, Mississippi was reporting 653 new cases.

Like other states across the South, Mississippi has lead the nation in its efforts to reopen the economy. Many restaurants have been open for dine-in for more than a month at limited capacity. Most state agencies are open. Movie theaters and entertainment venues are open.

The governor had initially planned to completely reopen the state by July 1. But on that date, he said a goal that is no longer feasible.

Reeves and state health officer Dr. Thomas Dobbs were adamant that efforts to reopen the state’s economy are not the cause of Mississippi’s spike.

“It’s not that our current rules are too loose,” Reeves said. “Our challenge is that our people aren’t following even the simplest of rules. Additional orders are useless if people will not follow what we have in place now.”

Dobbs said cases are increasing in those between the ages of 20 to 29 and in more urban counties of the state, including Hinds County in the Jackson area. He said most cases arose from people attending large gatherings and not following safety recommendations.

“It’s very simple. If we can’t maintain the simple things — six-feet, a mask and small groups only — we wouldn’t be having this conversation,” Dobbs said. “The virus would actually be petering out on its own. The draconian measures that we had to implement early on are not necessary if people will follow the simple rules.”

The Health Department said Wednesday that Mississippi — with a population of about 3 million — has had at least 27,900 cases and 1,082 deaths from the coronavirus as of Tuesday evening. Nine new deaths were confirmed Wednesday, with four of those deaths occurring between June 18 and June 25 and identified as from death certificates.

The Health Department said at least 2,664 cases of the virus have been confirmed in long-term care facilities such as nursing homes, with at least 527 virus-related deaths in those facilities.

The number of coronavirus infections is thought to be far higher because many people have not been tested, and studies suggest people can be infected without feeling sick. For most people, the coronavirus causes mild or moderate symptoms that clear up within weeks. But for others, especially older adults and people with existing health problems, it can cause severe symptoms and be fatal.