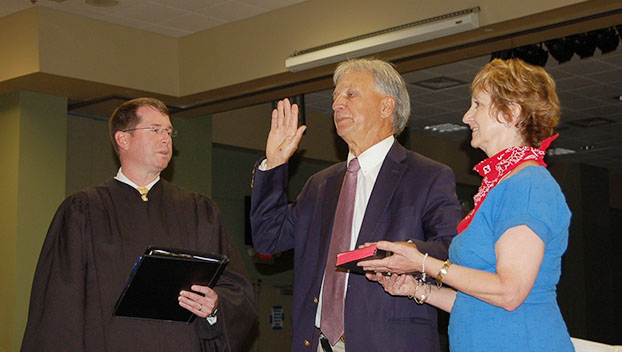 Andy Anders is sworn in Wednesday as the new clerk of courts for Concordia Parish. (Sabrina Robertson / The Natchez Democrat)

“Sheriff, as I said I appreciate and am looking forward to working with you — being very close as we always have been. We are family,” Anders said to Hedrick during the inauguration.

Anders won the seat as Clerk of Court in a Nov. 16 runoff election against Phillip Weber and Hedrick won the Sheriff’s election outright Oct. 12.

Others who were elected last fall include Concordia Parish Police Jurors Bill Yearby, District 2; Scottie Whittington, District 3B; Genesia Allen, District 4A; Gary Neal, District 4B; Collin Edwards, District 5A; Brad Adams, District 5B; and Maurice Bachus Sr., District 1A — who all took office during their first regular board meeting on Jan. 14.

Two incumbents, Joseph Parker Sr. in District 1B and Adam Probst in District 3A also took office again in January after running unopposed and Parker was appointed as Police Jury President and Probst as Vice President during January’s board meeting.