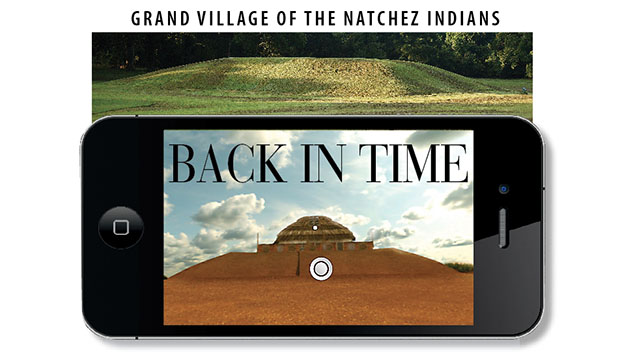 NATCHEZ — Until recently, people visiting the Grand Village of the Natchez Indians could only see with their mind’s eye what the oldest Natchez settlement looked like in 1730.

However, people with smartphones or tablets can now travel back in time to view the earth mounds built around St. Catherine’s Creek in a new virtual reality exhibit, which launched Monday.

“We’ve heard a lot of positive things from people who’ve downloaded it,” Grand Village Director Lance Harris said post-launch of the exhibit developed by the Mississippi Department of Archives and History and Timelooper, which not only allows people to visit the mound site in the 1700s but view it from anywhere in the world.

“You just need to have a compatible device that can utilize the app, such as an iPhone, iPad or Android device,” Harris said. “If you’re standing in the same vantage point and you have the app, you can see the landscape transform in front of you and on the screen see things that are no longer there.”

Timelooper is free to install either from Apple Store or Google Play.

Harris said the Grand Village won an MDAH drawing for the exhibit and the app features began development in August 2019.

Structures in the virtual reality experience were created using archaeological findings from recent studies on the grounds as well as first-hand accounts written by French colonists who observed the Natchez ceremonial mound site when it was occupied in the 1700s.

The app shows viewers the Sun Temple adorned with large wooden birds, accounts of which were documented by the French colonists, which once sat on top of the Temple Mound where the Natchez leaders conducted important ceremonies.

By hovering over points in the virtual reality field, viewers can also access information about other Natchez structures, the Natchez war with the French and the ceremonies that took place on the central plaza.

Harris said the grounds and museum at the Grand Village open July 7 and will be open Tuesday through Saturday from 9 a.m. to 4 p.m.

“We are following protocols related to the coronavirus pandemic,” Harris said. “We’ve put measures in place to help ensure the safety of our staff and our visitors.”