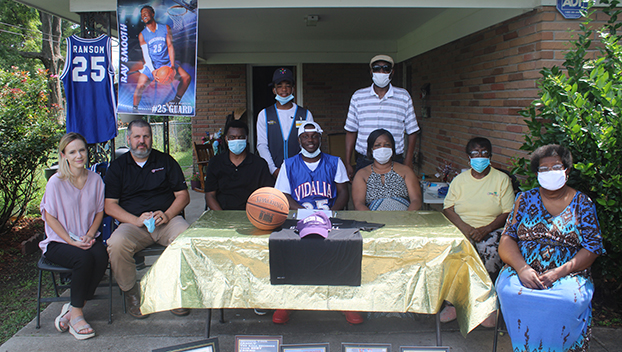 VIDALIA — Roderick Ransom Jr. of Vidalia made an announcement with family and coaches surrounding him on last Saturday.

Ransom announced he was going to continue his basketball endeavors by signing his letter of intent to play basketball at Spring Hill College in Mobile, Alabama, in the fall.

Kenny Lawson is Ransom’s personal coach during the summer. Lawson was on hand at the signing last Saturday. Lawson said Ransom is a good basketball player for any college because of the amount of effort he puts into the sport.

“To this day, we spend two hours each day working out,” Lawson said. “We go to Adams County Christian School in the mornings and he has put a lot of effort into basketball.”

Ransom said he has been playing basketball since he was 3 and never envisioned himself going to play college basketball.

“I had a connection with the coaches at Spring Hill College and Craig Kennedy was one of the coaches I talked to,” Ransom said. “I asked Kennedy if he had any roster spots open and he looked at my film. Two weeks later, he got back with me and offered me a spot on the team.”

Kennedy is the head coach of the Spring Hill College Badgers. The Badgers play in the Southern Intercollegiate Athletic Conference part of the NCAA Div. II. Last season, Spring Hill College finished 8-21 and lost 79-66 to Savannah State University in the SIAC Championship tournament.

During the 2019-2020 Louisiana High School Athletics Association boys basketball season, Ransom averaged 23.1 points, three rebounds and three steals a game for the Vikings basketball team. He was named as a LHSAA District 2-2A All-District Honorable Mention for his performance in his senior year.

“I’m ready to play at another level and continue my journey,” Ransom said. “I play because I love the game of basketball. I want to thank God for the opportunity.”

FERRIDAY — The Ferriday High School Trojans will have a ring ceremony at 6 p.m. Wednesday in the front parking... read more