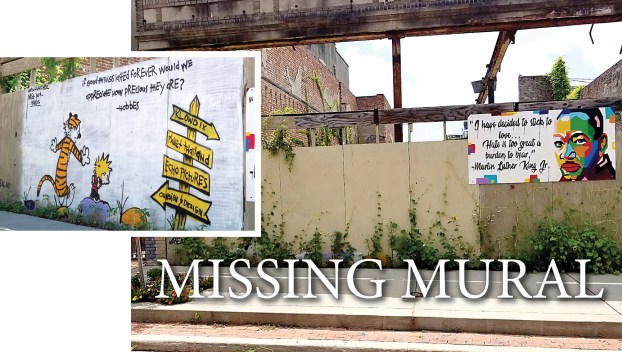 NATCHEZ — The appearance and mysterious disappearance of a downtown mural demonstrate the need for a serious conversation about the role of public art in Natchez, one property owner said.

A painting of the characters from the popular cartoon strip “Calvin and Hobbes” appeared during the first few weeks of the COVID-19 pandemic. The words “If good things lasted forever would we appreciate how precious they are?” were inscribed on the mural painted on the plywood walls covering the front of Edward Killelea’s property on Commerce Street.

On Tuesday, the artwork mysteriously disappeared, painted over by several coats of wood-colored paint.

Killelea has offered a reward on social media for information about who is responsible for painting over the mural he commissioned from local artist Damian Cross.

“If anyone knows who painted over the Calvin and Hobbes mural on my Commerce Street wall please private message me and I will be happy to pay you for this information,” Killelea wrote.

The mural was inspired by a previous piece created by Cross, Killelea said.

“At the time I was unaware that there was not an ordinance for murals because one had been installed on Dixie Furniture’s South Union Street warehouse door,” Killelea said.

The artwork, also created by Cross, featured the Disney animated character Baymax accompanied with the words, “Wash your hands.”

“I thought this was a great message for everyone during these trying times,” Killelea.

The positive response from that first mural inspired Killelea to do the same thing on his property.

“After more than a month of driving by the mural on South Union Street, I thought of my wall on Commerce Street and how this space would be a great central location to also send a message,” Killelea said. “That’s when I decided to put the ‘Calvin and Hobbes’ mural up.”

Killelea later added a painting of Martin Luther King Jr. with the quote, “I have decided to stick to love … Hate is too great a burden to bear.”

On Wednesday, that painting remained beside the empty space where the ‘Calvin and Hobbes’ once was.

In his Facebook post, Killelea listed artist Kevin Brodeur as a possible suspect in the painting’s disappearance, saying that Brodeur had previously threatened to paint over the sign. Brodeur’s art gallery is next door to Killelea’s property on Commerce Street.

On Thursday, Brodeur said he is not responsible for the mural’s disappearance and does not know who is.

“I have no problem with murals. I am all for it,” Brodeur said. “This was a touch graffiti. If it was a picture of a beautiful town square with a jazz singer or something, I would be all for it.”

Natchez Director of Planning and Zoning Riccardo Giani said the city does not currently have an ordinance for murals. Any exterior changes to a property in the downtown historic district would require approval from the Natchez Preservation Commission, Giani said.

The two murals that appeared downtown in recent months did not have approval from the commission, Giani said. At the direction of the commission, both property owners, including Killelea, were sent letters requiring the properties be returned to their original appearance, Giani said.

The “Wash your hands” mural on Union Street has since been painted over.

Giani said the development of a mural ordinance has been discussed and deserves consideration.

“Murals are prevalent in America,” Giani said. “(The appearance of these two murals) may be the community’s way of saying this is what we wanted.”

Killelea said murals could be of great benefit to towns and cities.

“I’ve conducted extensive research of murals in other cities where they are used to benefit diverse communities,” Killelea said. “Some of the many benefits include promotion of public art; economic benefits for attracting tourism; promoting positive mental health as well as improving blighted areas.”

Cross said he is a firm supporter of murals in the Natchez Arts District — of which Commerce Street is a part.

Cross said the number of pictures of people standing in front of murals across the globe on social media points to the importance of public art.

Cross said the mural he created had already proven to be popular in the community. Many high school seniors had their pictures taken with the mural, Cross said.

“Art is supposed to be used as a weapon for positive change,” Cross said.

Cross said his ‘Calvin and Hobbes’ painting was meant to portray such a message.

“It was meant for positivity in one of the darkest times we have ever lived through,” Cross said.

Killelea said he hasn’t decided whether he will replace the missing artwork with another mural.

Killelea said he questions whether he needs approval for artwork on what is a plywood barrier across the front of an empty space that once was a building.

“I look at my wall as ply board and not an original wall. This building is not historical because it is not standing anymore,” Killelea said.

If he does decide to put up another mural, Killelea said he is not sure if he will go before the preservation commission for their approval.

“They have had a long time to implement an ordinance,” Killelea said. “It doesn’t seem to be something they want to move on.”

Killelea said he hopes the situation sparks change in the community.

“I welcome the opportunity for a public forum of sorts where the city and community have input into an ordinance for murals,” Killelea said. “One that is clear, inclusive and representative of now and the future.”