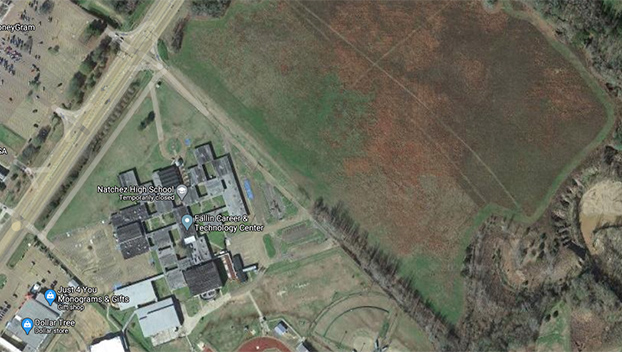 NATCHEZ — The Natchez-Adams School District is moving forward with plans to build a new high school now that a series of lawsuits that were stalling the project have been settled.

Jordan, Kaiser & Sessions LLC engineers are in the process of surveying property adjacent to the current Natchez High School known as the “bean field” to make way for a proposed $14 million high school that will be financed through a combination of Trust Certificates and a 3 mil tax increase, school officials said.

The total cost of the project is $25 million, which will include remodeling the current high school to become a middle school facility at an estimated cost of $11 million of the total cost.

Adams County voters rejected a $35 million school bond issue at the polls in May 2017 that would have funded a new high school as well as renovations to Susie B. West and Frazier elementary schools.

After the bond issue failed at the polls, the school district proceeded with a 3 mil tax increase to fund a scaled-back version of building a new high school.

Mississippi law allows school districts to levy up to 3-mils in limited tax notes for the construction of school buildings.

A group of citizens led by Kevin Wilson filed suit to block the district from proceeding with that plan and the ensuing court battle delayed action until Wilson dropped the suit in March and accepted a settlement from the school to do so. That move cleared the way for the school district to move forward with building plans.

The school’s plan now is a scaled back version of the original plan, dropping plans for updating Susie B. West and Frazier.

“The building will consist of four learning houses or wings with eight classrooms in each wing,” McDonald said. “The new construction will be an enclosed facility to increase student safety.”

M3A Architects are currently working on plans for the project and Volkert Construction of Alabama got the contract to manage the construction project, said Phillip West, a member of the NASD board.

“The design has been modified appropriately to meet the evolving needs of our student population,” McDonald said. “We are preparing for the construction phase with a tentative completion by 2022.”

The cost of the new school is approximately $25 million and the cost of renovations for the current high school to become a middle school is approximately $11 million, McDonald said. The project is being financed by a combination of trust certificates and a 3 mil note issued by the district. One mil is equal to $1 per $1,000 of a property’s assessed value. That means additional tax on a home with an assessed value of $100,000 would increase about $300 per year.

School officials said state law allows the district to issue the 3 mil increase and to take on the trust certificates without a vote of constituents.

“The vote by the public that was taken three years ago involved the issuance of a $35 million general obligation bond, which failed,” McDonald said. “Thus, the school district pursued other means to finance improvements to its facilities. School districts statutorily do not initiate elections to seek permission to make repairs or build schools. They seek public permission for certain methods of financing those repairs or building schools. The school district maintains an obligation to the children of its district and the community to ensure that its facilities are quality. That is not an obligation for the district to pass to another entity.”

McDonald said after the bond measure failed in 2017, the court gave the district permission to proceed with the scaled-back plan and alternate funding.

The Natchez-Adams School District will hold a public hearing on its proposed 2021 budget at 2 p.m. July 27 at the district’s headquarters at 10 Homochitto St., Natchez.

“We anticipate that ground will be broken soon,” McDonald said. “An exact date has not been set.”

Sunday Focus: What are plans for back to school?