The Dart: Local woman answers call of the wild 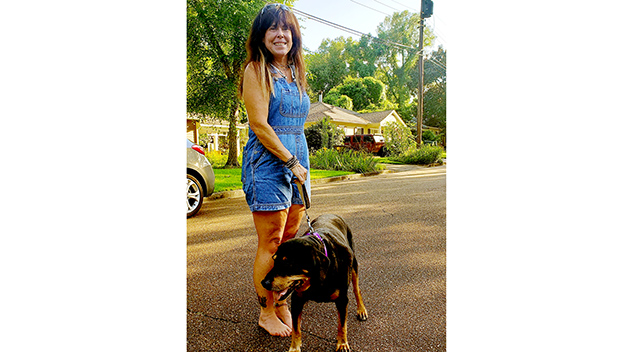 NATCHEZ — No stray dog or cat that wanders near Katherine Christian’s house on Wheeler Drive will ever be without a home if she has something to say about it.

Christian, who was walking her 15-year-old rescue pup, Zynna, when The Dart landed in her neighborhood Wednesday afternoon, said she has been a lover of any type of animal for most of her life.

“We just call her Z,” Christian said of her mixed-breed, mid-sized dog. “I got her and raised her from a puppy. She was free to a good home. We’ve been together a long time.”

Christian’s wild kitty, whom she calls “baby kitty,” was also hanging out in the neighborhood during Z’s walk on Wednesday.

“He showed up in March right around when COVID started, and I’ve just about got him tamed,” Christian said. “Every time I’ve tried to give him a name, I go right back to calling him ‘baby kitty.’ I guess I’ll call him Mr. Kitty as he gets older.”

Christian said she has two bulldogs and more rescued cats at home.

“I’m a farm,” she said with a laugh. “Around this neighborhood, the joke is if you can’t find your animal just come by my house. Odds are, they’re hanging out down there.”

When Christian was growing up in Adams County, she said her family raised horses and livestock and it’s her dream to move away from the city and start a true farm herself.

“If I get a bigger space somewhere out in the country, I’ll be able to give some bigger guys like horses, cows and donkeys a home. That’s the ultimate goal,” she said.

Even living inside the city doesn’t stop Christian from making some wild animal friends, she said.

She didn’t mind as neighborhood raccoons snacked on her cats’ food and became somewhat her pets, too — at least not until a momma raccoon showed up at her door with a litter of kits.

“I got worried that we were getting too big of an entourage and that could get dangerous,” she said.

The strangest “pet” Christian said she’s ever had was a bear that lived in the backyard of her old house near Pearl Bayou approximately five years ago. At least the bear seemed at home taking food from the bird feeders around her house, Christian said.

“The bear kept coming up and throwing the bird feeders across the yard,” she said. “At first we thought it was raccoons but raccoons don’t really throw bird feeders. Then my mother actually saw the bear out of hibernation. He eventually wandered along and I hadn’t seen him since.”