Police searching for suspect who fled scene of drug arrest 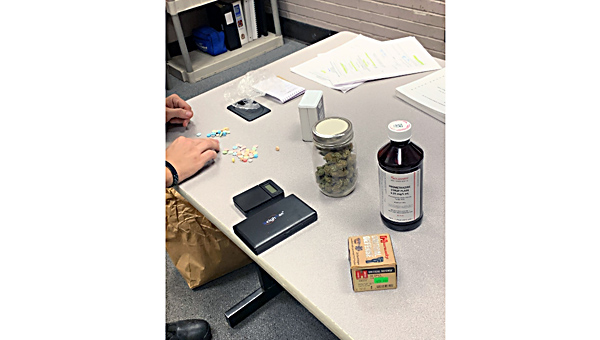 NATCHEZ — Natchez police officers are looking for a suspect they said fled the scene after drugs were found in the car he was a passenger in during a Monday night incident at Duncan Park.

“Egermeier made a traffic stop on the vehicle to warn the driver that the park closed at 10 p.m. and that’s when he smelled an odor of marijuana in the car,” Armstrong said. “Egermeier stated he saw a pistol laying on the back seat and then the passenger, Tyrone McGriff, threw a shirt over the weapon.”

Armstrong said the officer ordered McGriff to turn around and place his hands where the officer could see them.

“McGriff grabbed the weapon and exited the vehicle while (Egermeier) was calling for backup,” Armstrong said. “Egermeier stated the driver Dekirra Brown gave him permission to search the vehicle and he confiscated 40 grams of marijuana, 58 Ecstasy pills, 1 bottle of promethazine, two digital scales and several small baggies.” The driver, Brown, 19, who lives on Dumas Drive, was charged with one count of felony possession of marijuana in a motor vehicle, and one count of possession of a controlled substance, Armstrong said.

“McGriff hasn’t been arrested on his charges yet,” Armstrong said. “He fled the scene.”