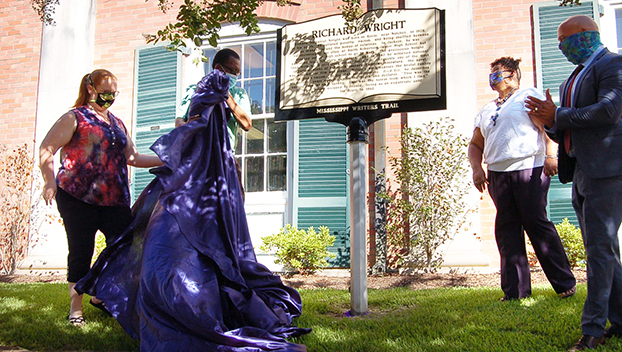 A marker dedicated to the late Mississippi author Richard Wright at the George W. Armstrong Library became the latest addition to the Mississippi Writers Trail on Thursday. (Sabrina Robertson / The Natchez Democrat)

NATCHEZ — A marker dedicated to the late Mississippi author Richard Wright at the George W. Armstrong Library became the latest addition to the Mississippi Writers Trail on Thursday.

The Mississippi Writers Trail, created by the Mississippi Arts Commission, is a series of historical markers that pay tribute to lives and influences of the state’s most acclaimed authors, officials said.

Other markers on the trail feature the birthplace and influences of Margaret Walker Alexander, William Faulkner, Eudora Welty, Tennessee Williams and more.

Wright, who was born in 1908 on a plantation just outside of Natchez that later became a part of Natchez State Park, drew upon Natchez influences for his autobiography “Black Boy” and the novel “The Long Dream,” which was influenced partly by the Rhythm Night Club fire that took place in Natchez in 1940, said Visit Natchez Executive Director Jennifer Combs during a ceremonial unveiling of the marker Thursday.

His novel “Native Son” was adapted for both film and stage productions, Combs said.

“Some of Wright’s works exposed the bitter reality of American racism,” Combs said. “What more fitting time for us to be unveiling this monument than today? Because of his passion and political beliefs, Richard Wright is considered by some to be the godfather of the American Civil Rights Movement.”

Natchez Mayor Darryl Grennell said the newest marker outside the library is the third Richard Wright dedication located in Natchez.

“It’s like a record that you put on a record player and play over and over again. Over a period of time, it’ll stick and you’ll like it. There have been songs that I’ve heard that when I initially heard them I didn’t care for them but after I heard them over and over they would stick,” Grennell said. “It’s the same in respect to the repetitiveness of telling the history of Richard Wright and his presence here in the City of Natchez. The more markers that we get to tell the history of individuals like Richard Wright, the more it will permeate to people, especially young people, who possess great talent and who are future great writers.”

Grennell said he felt the library was an appropriate place to have a marker that commemorates Wright as one of the great writers born in Natchez.

“The (Mississippi Writers) Trail will span the state and highlight notable places that helped shape the world’s most acclaimed authors’ lives and influenced their renowned works. The City of Natchez is pleased that our native son Richard Wright has now been included in the Mississippi Writers Trail project,” Grennell said.