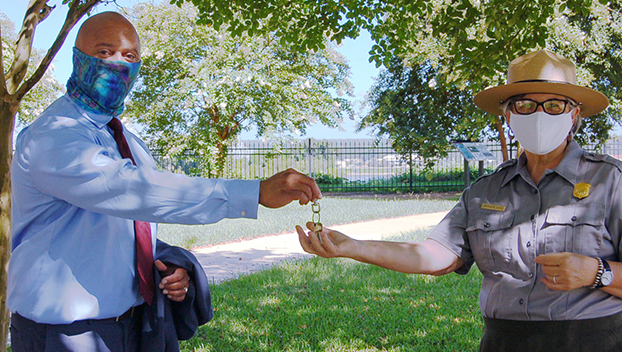 NATCHEZ — The City of Natchez formally transferred ownership of the Natchez Visitors Center to the National Park Service on Thursday morning.

After a brief ceremonial “passing of the keys,” officials said closing documents for the transfer would be singed Thursday afternoon, making the National Park Service the new owners of the Natchez Visitor Center on Canal Street.

Completed in 1998 as a partnership project between the city, state, Mississippi Department of Transportation and the NPS, the 25,000 square-foot building had served as a state and regional welcome center, providing tourist information services for hundreds of thousands of visitors annually to the greater Natchez region.

With the transfer, the Natchez National Historical Park is poised to provide a new level of leadership to the Natchez tourism community and drive local economic development.

In addition to gaining ownership of the visitor center NPS will later finalize its acquisition of land at the Forks of the Road slave market site, which will open doors for future development and the expansion of Natchez National Historical Park.

Kathleen Bond, superintendent of Natchez National Historical Park, expressed her excitement about the transfer of ownership and said NPS will make no immediate changes in operations at the facility.

“The transfer not only provides a stable funding stream for the facility but also gives us the opportunity for this space to tell a more complete story of Natchez in a way that is updated for the 21st century,” Bond said. “My hope is that this building will become a must-see destination in and of itself, in addition to pointing visitors to go out and enjoy all that Natchez has to offer.”

Resting on 11.45 acres at the eastern end of the Mississippi River bridge, the prominent facility is immediately adjacent to the Park’s historic Fort Rosalie site. The building also serves as the southern terminus visitor center for the Natchez Trace Parkway.

Bond said now that the transfer is complete, NPS will move forward with addressing deferred maintenance needs, including replacement and repair of the roof and HVAC system at the facility.

Bond is coordinating a new Commercial Services Strategy process that will reach out to existing partners and gather public input regarding future operations at the Natchez Visitor Center. Virtual meetings for public input will be announced for late August, with completion of the plan expected by February 2021.

Joyce Arceneaux-Mathis, who was one of the alderman originally involved in the design and building of the facility, expressed her support of the transfer.

“I am ecstatic and overjoyed that the National Park Service will acquire that property. I believe that because of the Park Service’s relationship with the City of Natchez in terms of the properties they currently oversee, this partnership is ideal for all entities involved at the Visitors Center and the City of Natchez,” Mathis said.

Mayor Darryl Grennell and incoming mayor, Dan Gibson, both expressed their hope that the transfer of the Visitors Center reflects a positive economic step for the city.

“These changes are a sign of the possibilities for a new stronger economy and a healthier, unified community,” Gibson said.

Grennell said he is particularly proud to have finalized the details of the transfer before the end of his term as mayor.

“This will increase our position as a major destination for cultural tourists and have a positive economic impact for decades to come,” Grennell said. “I am grateful to everyone who embraced this vision and helped see it through. I am especially grateful to the National Park Service for its ongoing commitment to Natchez’s diverse and difficult story. Our story must be told in full if our nation is to move forward. I’m excited about the future of Natchez.”

Police searching for suspect who fled scene of drug…