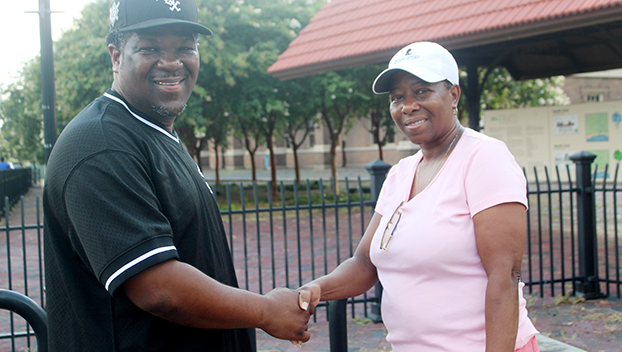 Patrick Armsted and Debra Hopkins were reminiscing about the good days in Natchez. (Patrick Murphy / The Natchez Democrat)

NATCHEZ — Patrick Armsted and Debra Hopkins were reminiscing about the good days in Natchez when The Dart landed Wednesday afternoon on the Natchez Bluff.

Armsted said they were enjoying the beautiful view of the bluff and the Mississippi River after the two longtime friends ran into each other and began reminiscing.

“I was working two jobs in Natchez and getting nowhere,” Armsted said. “I was like, ‘What can I do to make decent money?’ and decided to be a crane operator.”

Hopkins, 55, attended Southern University and now resides in Baton Rouge. She has lived in Baton Rouge for 37 years and works as a cafeteria worker at Broadmoor Elementary School in the East Baton Rouge Parish School system.

“I moved out of state because I could not make enough money to raise kids,” Hopkins said. “I can imagine what my parents went through and how they made $1 an hour just working. Natchez is a town for people who are settled down and that have money.”