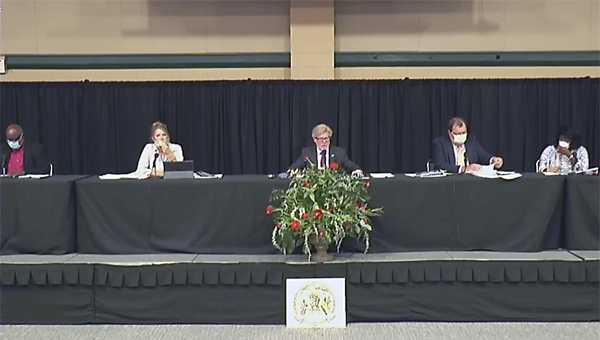 Members of the Natchez Board of Aldermen during Tuesday’s regularly scheduled meeting. (Screen Shot)

NATCHEZ — Members of the Natchez Board of Aldermen during Tuesday’s regularly scheduled meeting attempted to overturn the appointment of Nickita Banks as municipal judge pro-tempore.

Ward 2 Alderman Billie Joe Frazier said that Banks’ appointment did not comply with the City of Natchez Charter Code because she is not a city resident.

Banks, who was appointed to the position last week at the recommendation of Natchez Mayor Dan Gibson, had previously served as a public defender and Justice Court Judge in Claiborne County.

Ward 5 Alderman Benjamin Davis made a motion to table the item until the board could obtain an opinion from the Mississippi Attorney General’s office as to whether the city violated the charter code. Ward 3 Alderwoman Sarah Carter-Smith seconded the motion that passed by a vote of 4-2, with Frazier and Bridgewater-Irving voting “nay.”

Frazier said the city did not need the attorney general’s opinion on the matter.

“This board knows from the beginning that this is against the city charter that we are governed by and therefore we do not need the attorney general’s opinion,” Frazier said. “The attorney general, as you and I know and everyone in the city knows, has just an opinion. The City of Natchez deserved better and if we’re going to be moving away from the charter and this is the way that we’re going to be operating the city government. It is wrong.”

Bridgewater-Irving recommended Natchez attorney Tony Heidelberg — who had served as municipal judge pro tem during the previous administration — be reappointed to the position.

“I want the citizens of Natchez to realize that we are in a pandemic — and everyone knows that — and the issue is that we are hiring someone who does not reside in the City of Natchez,” Bridgewater-Irving said. “We have an economic impact that affects everyone and (the municipal judge pro tem) should be from Natchez-Adams County. … Those tax dollars that would be paying their salary should be spent on someone who actually lives and resides where those tax dollars would be spent, here. Not drifting away to another county. I feel that Mr. Heidelberg should be the nominee for municipal judge pro tem.”

Gibson said the attorney general’s opinion would be brought back before the board of aldermen at a later meeting.

In a later meeting, Gibson said the board would discuss creating two new city-employee positions and has recommended Richard Burke to be the mayor’s executive assistant and Brian Marvel to be the community liaison.