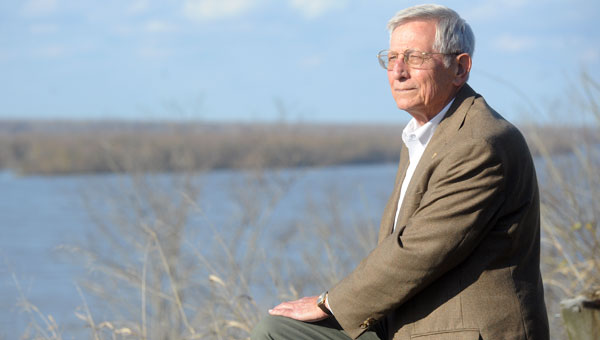 By Scott Hawkins and Ben Hillyer

NATCHEZ — Area residents and state leaders are mourning the death of former Mississippi State Sen. Bob Dearing, who died Thursday in Natchez at the age of 85.

Dearing served 36 years in the Mississippi Legislature, first being elected to office in 1979 as a Democrat and serving for eight terms until he was defeated in 2011 by Republican Melanie Sojourner.

Four years later Dearing defeated Sojourner to recapture the seat he once held.

Dearing announced his intention to retire and not seek reelection to the senate in January 2019, saying he was ready to retire and Sojourner subsequently reclaimed the seat.

Born in Natchez in 1935, Dearing was the son of Weenonah Montgomery and Robert V. Dearing.

He was married to Shelley Paige Ditzler Dearing and had three children, Bo, Daye and Paige.

Daye Dearing said she and her siblings knew her father as being loving, kind, generous, loyal and patient.

“Being patient was one of his best qualities,” Daye said. “He was honest, straightforward and a man of his word.”

A Sunday School teacher at the First Presbyterian Church in Natchez for as long as she can remember, Daye said faith played a very important role in her father’s life.

Daye said above all her father loved being a public servant and a state senator.

“He thrived on it. He loved being useful and helpful to others,” Daye said.

Daye said her father assisted many people through the years.

“And not just as a public servant,” Daye said. “He loved helping people solve their problems. He was selfless in that way.”

“He did not seek power or control,” Daye said.

Although many people encouraged her father to seek higher office through the years, Daye said her father was happy where he was.

“He just liked being a state senator,” Daye said. “He just wanted to be Bob M. and help people.”

Former Natchez Mayor Tony Byrne said Dearing was a statesman and a friend.

“Bob just did so much for Natchez, Adams County and the State of Mississippi,” Byrne said. “It is hard to pin down any one to 10 things that he has done.”

Among Dearing’s many accomplishments, Byrne said Dearing was instrumental in saving the Gulf Coast by introducing a riverboat gambling bill in the early 1990s.

“Whether people were for or against it, it certainly saved the Gulf Coast,” Byrne said.

Dearing also did a lot for education, recreation and the fight against animal cruelty, Byrne said.

“He did a tremendous amount of good,” Byrne said. “He was very careful to try to not hurt anyone’s feeling. Sometimes I would get on to him about that. I would say, ‘Sometimes you’re not mean enough Bob.’”

Byrne said Dearing was his best friend from childhood and that he frequently competed against Dearing on the playground in local organized sports, because they lived on opposite sides of the community.

Byrne said Dearing would mostly be remembered for his love for all people.

“His genuine concern for everybody was his strength, in Natchez, Adams County and the State of Mississippi, too.”

“To me he was truly the example of a senator,” Grennell said. “He was a soft-spoken gentleman at times and when it was time to be aggressive, when he was fighting for something for citizens of Adams County, his whole personality would change because he was so dynamic and so hardworking for the citizens of Adams County and other areas that he represented.”

Grennell, who also served many terms as an Adams County supervisor, said Dearing helped secure funding and legislation for numerous projects through the years.

“Sen. Dearing helped us with so many projects in Adams County when I was on the county board and later when I became mayor,” Grennell said. “He was always helpful in terms of trying to help us to get certain things we needed for Natchez-Adams County. The thing about Sen. Dearing was anytime I called him he always answered, always. He is truly going to be missed by the community. No question about it. A great man, Sen. Dearing, that he was.”

Despite being a lifelong Democrat, Dearing was successful at working with colleagues across the aisle.

U.S. Sen. Roger Wicker, R-Miss., served in the state Senate with Dearing in the late 1980s.

“Bob Dearing was my first chairman as a state senator in 1988,” Wicker said. “We have been friends ever since. We’ve worked on many issues and shared many laughs. I will miss him.”

Rep. Sam Mims, R-McComb, said he first met Bob Dearing in 2003 when Mims first ran for the Legislature. From the beginning, Mims said Dearing was kind and generous, especially when answering questions and guiding Mims through the legislative process in his first term.

“He was very kind to me when he didn’t have to be,” Mims said.

Mims said Dearing demonstrated his commitment to the region and the state.

“He loved Natchez and his community,” Mims said. “Adams County is better today because of Sen. Dearing.”

Kirby said he and Dearing formed a close friendship over the years, despite the fact that they sat on different sides of the aisle in the Senate.

“He studied every piece of legislation and kept in constant contact with his constituents,” Kirby said. “He voted his conscience.”

“He was very deserving of a park being named after him,” Kirby said.

The bill passed the Senate, Kirby said, but because of the COVID-19 pandemic it did not come up for a vote in the House. Kirby said he hopes the bill will be reintroduced next year.

Kirby said even though he and Dearing disagreed on the issues, he never heard Dearing raise his voice.

“He was very personable, very intelligent and very nice,” Kirby said. “I will truly miss him.”

Newly elected Natchez Mayor Dan Gibson said he is working on a resolution to declare Bob Dearing Day in Natchez at a date to be determined.

“I am really just heartbroken to hear the news about Sen. Dearing,” Gibson said, adding that he also is asking everyone in Natchez and ordering all city buildings to lower flags to half-staff. “Natchez has not only lost a native son who meant so much to us today, but Mississippi has truly lost a patriot. Bob Dearing did more for this community and more for this state than anyone will ever know.”

Gibson said he was fortunate to have known Dearing for many years having first met him as part of Gibson’s lobbying work.

“I was so honored in January, when nobody even knew who Dan Gibson was, Sen. Dearing was the very first public official to step out and endorse me for mayor,” Gibson said. “We had a great conversation just a week ago after the election, and I was actually going to call him this afternoon and check in.”

Gibson said he heard the news when he was at lunch and immediately paused to pray for Dearing and his family.

“I’m heartbroken,” Gibson said, “but I do know this. Bob Dearing loved his Jesus, and Heaven is a richer place right now because he is there. Every morning, he signed on to Facebook with the words, ‘In the morning when I rise, give me Jesus.’ Our prayers are with Shelley, the girls and that beautiful family. Beautiful family.”

He attended Delta State Teachers College 1953-57, graduating with a bachelor of science in education.

He taught school and coached in the Natchez public schools from 1958 to 1964.

He graduated from the University of Southern Mississippi in 1965 with masters in school administration. He was an elementary principal fro the Natchez public schools from 1965 to 1966.

He was elected to the Mississippi State Senate in 1980 and served for 36 years. He retired from the senate in 2019.

Grennell said one of the last acts he signed as Mayor of Natchez was to make Dearing a part-time employee of the Duncan Park Golf Course.

“Not that he needed the job, but it was something that he enjoyed doing,” Grennell said. “I do remember he called me to thank me for signing him on as a part-time employee at Duncan Park Golf Course. It was just something he wanted to get out of the house to do every day.”