Phillip West: ‘Only truth will make us all free’ 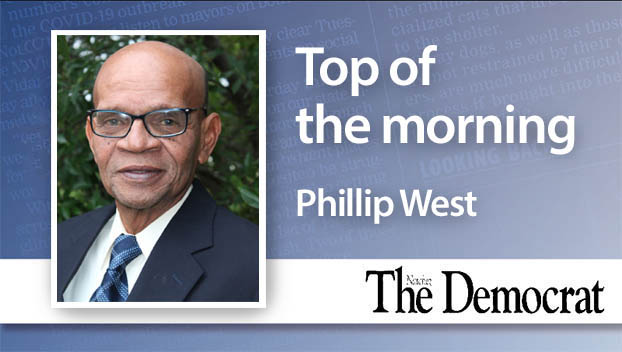 This article is written in response to an opinion written by Jan Griffey general manager of The Natchez Democrat, and published in the July 19 edition.

Griffey states, “In the spirit of kindness, I am choosing to think Phillip West’s intentions were the best, but I was sorely disappointed when I watched video of West tearing down Dan and his record, of him referring to Natchez as a hick town, of him blaming a lack of jobs in Natchez on the owners of antebellum homes here.”

Evidently, Griffey believes that Dan’s record should be hidden from the community. The community should be aware of the facts. Facts that include, in 1999, Dan ran for Governor as a lifelong Republican.

During that campaign he spoke to the Conservative Citizens Council, a group that stands against integration and desegregation according to the Southern Poverty Law Center. Also, Dan was quoted as saying publicly, “anybody who votes for Governor Ronnie Musgrove (Democrat), is crazy.”

Griffey does not want you to know that Dan’s support was coming from the same people who opposed upgrading our deplorable school facilities for the children who attend public schools, the people who opposed building a public swimming pool so all children could have an opportunity to learn to swim.

There is an old saying “birds of a feather flock together.”

As for “Voters white and black showed they are ready to leave the division behind and work together in a unified way to create a better, prosperous community fall all of our children and grandchildren.”

Let me say this, I know you will never admit, that in many instances, a white face is the most relevant reason many vote as they do. Many in this community hated President Barack Obama and love Donald Trump, based on their skin color. Jim Crowe and “Where the Old South Still Lives” are still prevalent in our community, state and nation.

In Reference to “sad for the man,” I, too, am sad. Sad for the sins of slavery, sad for a Civil War being fought to maintain slavery, sad for the “Jim Crowe and KKK period,” denying African Americans the right to vote and “equal justice under law,” sad that some whites in this community abandoned the public schools and organized three private schools because they did not want their children attending school with black children, and that approximately 65% of the people in Natchez-Adams County live in poverty/working poor, sad we have lost population over the last 30 years because of lack of visionary leadership exhibited by those who do not look like me, sad it took approximately 300 years for persons such as myself to achieve adequate representation in city, county and state government.

Also, it is “sad” that it was necessary for me to spend all my life fighting for “equal justice and equal opportunity under law” while you and others were given a “pass.”

I hope you are also saddened by these facts. Furthermore, I hope the “Natchez Democrat” (called the Natchez Dixiecrat by many in the black community) will finally take a different stance and help lead our community and our Natchez to a better place.

It is my prayer that you, if not me, will live long enough to see “people being judged based on the content of their character and not the color of their skin.” Remember, Jan, “only truth will make us all free.” Even during the Civil War to abolish slavery, there were some “slaves” who fought to remain enslaved on the side of the Confederacy.

Phillip West is a former mayor of Natchez and member of the Natchez-Adams School District Board of Education.

Board shows commitment to open meetings