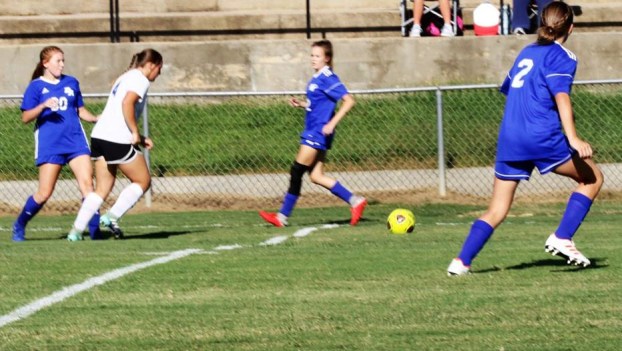 Halle Peterman lines up for a penalty kick on goal against Brookhaven Academy. Peterman is one of the Two Seniors for the Lady Rebels this year. (Submitted Photo)

McIlwain broke a scoreless tie in the 20th minute of the first half to give ACCS a 1-0 lead. Boyd put the ball in the back of the net at the 38th minute for a 2-0 Lady Rebels lead at intermission.

“The girls came out a little sluggish in the first 15 minutes. Then our passing, trapping, and communication got better,” said Jimmy Allgood, Lady Rebels head coach. “Once we got into a rhythm, we took control. The girls played very aggressive and it was a hard-fought match.”

Wilson scored a goal at the 52nd minute into the second half and Timmons finished off the shutout win with a goal of her own at the 65th minute.

Sarah Gordon played goalkeeper for the first 20 minutes of the match and had three saves. Reagan Lee took over for the final 60 minutes and recorded six saves.

“Both of our goalies have maintained shutouts this season,” Allgood said. “I’m very proud of each and every one of them. The JV and varsity girls got to play in the varsity match.”

Softball round up: Cathedral holds off Porter’s Chapel; Centreville shut out by Brookhaven Academy