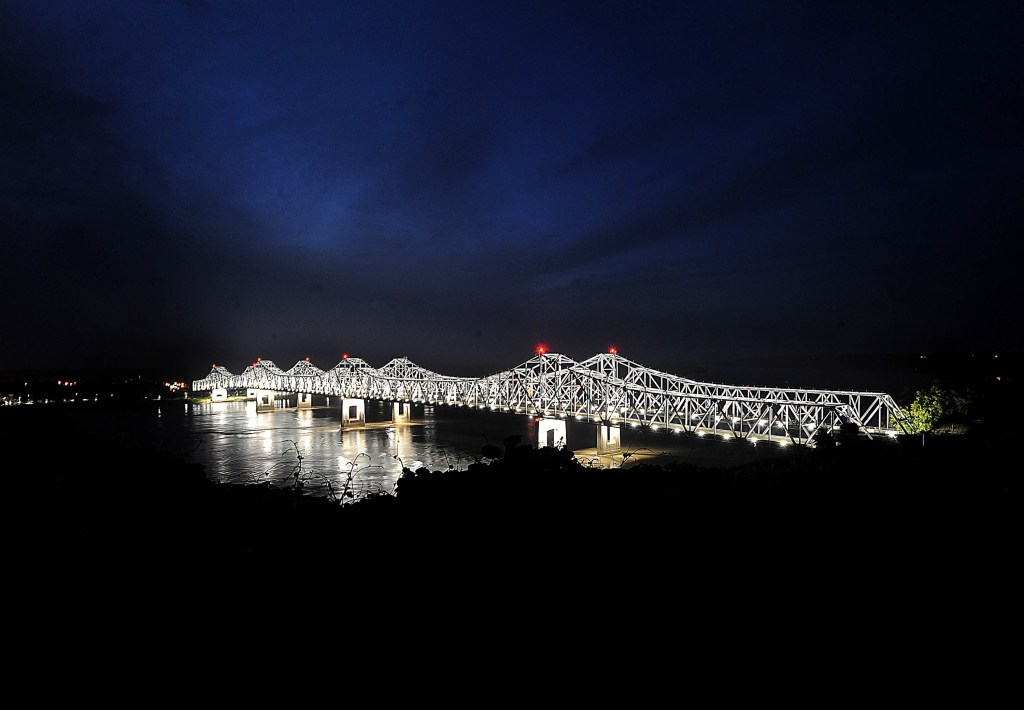 The bridges between Natchez and Vidalia were once lighted. The lights have since been removed.

NATCHEZ — A plan is underway to relight the bridges joining Natchez and Vidalia.

During a regularly scheduled meeting of the Natchez Mayor and Board of Aldermen Tuesday, Natchez Mayor Dan Gibson said the Mississippi Department of Transportation is considering completely funding the installation of LED lights on the bridges.

“Over the last few months, I have been working behind the scenes with former Mayor Butch Brown to lobby for an agreement with MDOT to relight the bridge,” Gibson said. “We have a verbal commitment from Mrs. Melinda McGrath (executive director of MDOT) on behalf of MDOT. However, it still has to be approved by the Mississippi Department of Transportation.”

Gibson said once MDOT gives their final approval of the project, there would be a bidding process and Natchez and Vidalia officials would receive figures for maintenance and utility costs.

After installation, the City of Natchez would pay for maintenance and the Town of Vidalia would pay for electricity to keep the lights on going forward pending approval by elected officials in Natchez and Vidalia, Gibson said.

Vidalia Mayor Buz Craft, who also attended the meeting in Natchez, said the bridge-lighting agreement would be discussed by the Vidalia Board of Aldermen at their meeting later Tuesday evening.

“We agreed years ago to supply the power to our lights. However, I just want to revisit that, and I’m looking forward to it. I can’t see anyone being against it because it’s a very special thing to the people of Natchez and Vidalia when they go to the bluff or the riverfront and see that bridge lit up. It’s a beautiful thing,” Craft said.

In other matters during Tuesday’s meeting of the Natchez Mayor and Board of Aldermen, the board unanimously approved the hiring of Richard Burke as Executive Assistant to the mayor with a salary of $45,000 and Brian Marvel as Community Liaison with a salary of $30,000.

Frazier said the board should wait until they’ve had a meeting with the Adams County Board of Supervisors and the Natchez Adams County Recreation Commission take action.

Bridgewater-Irving said she felt a committee wasn’t needed and the hiring of a tennis pro that should fall under the duty of the recreation commission.