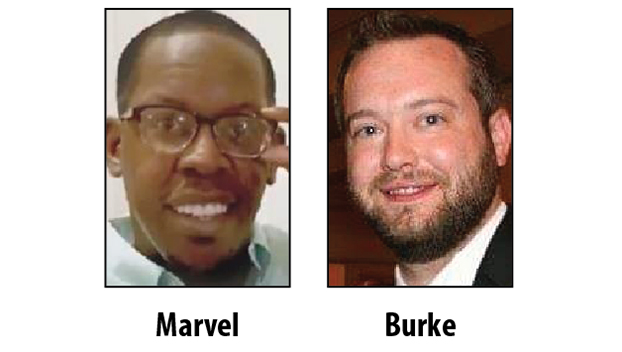 NATCHEZ — Natchez Mayor Dan Gibson added two new employees to the payroll at City Hall during a regular meeting of the Mayor and Board of Aldermen this week.

Brian Marvel was hired as the Community Liaison with a salary of $30,000 and

Richard Burke as the Executive Assistant to the Mayor of Natchez with a salary of $45,000.

Gibson said both positions are new to the City of Natchez and should help the city accomplish as much as possible during his four-year term as mayor.

“We felt strongly that we have so much to accomplish as part of our plan for the Natchez renewal that we needed help to get it done,” Gibson said. “As we say, Rome wasn’t built in a day and one person didn’t build it. It takes a team. I’m excited to have great department directors and great aldermen to work with but their plates are already full. I don’t want to be a mayor that just reacts to everything. In order to be a proactive mayor, I have to have the ability to delegate.”

Gibson said Burke would be a second point of communication to the mayor’s office for board members, department heads and delegate leaders and could further help Natchez secure funding for projects from state and federal sources.

Burke would also serve on task forces pertaining to economic development, downtown development and further developing and aiding the medical jobs and workforce in Natchez.

Burke said he earned a political science degree from the University of Mississippi and has had a lifelong interest in politics.

As a lifelong resident of Natchez, Burke said he is also passionate about helping his hometown.

“My dad was the public works director and my mom was a social studies teacher so it has always been an interest of mine. I’ve worked in several campaigns over the years and in different advocacy groups with legislative agendas. It has always been a goal of mine to become a public servant and help Natchez become a better place.”

Likewise, Marvel grew up in Natchez, knows the city and has seen the better parts of the city and the worst, he said.

“I’ve walked through communities that most people wouldn’t drive through,” Marvel said. “We have six wards throughout the city and I know every ward. I’ve walked every street.”

Marvel said he would help Gibson address community needs by opening another line of communication with the citizens themselves.

Marvel will also serve on task forces for community development, unity and diversity in tourism and address problems in the city that, in the past, have been neglected, Gibson said.

Marvel’s mother, Delores Marvel, inspired him to help others as she worked as a caregiver for elderly and disabled persons outside of nursing homes, he said.

“I’ve always had a joy for helping others and seeing them happy,” Marvel said. “My goal is to make Natchez the best place to live for all people. It takes a special person to have that goal. It’s in God’s plan, not mine. I give all the glory to him.”