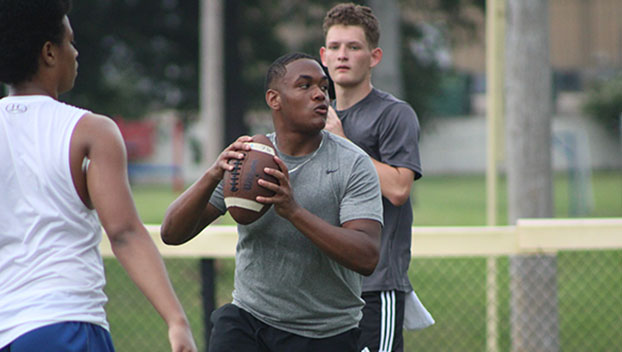 NATCHEZ —The Adams County Christian School Rebels combined a strong running game and a key defensive stop by the defensive line to win 13-7 over the Riverfield Academy Raiders in a jamboree on Friday night.

The Rebels had been scheduled to play the jamboree on the road at Madison Ridgeland Academy in Madison, but earlier this week, an MRA player reportedly tested positive for COVID-19 and the MRA Patriots team was sidelined by a quarantine.

So, ACCS hosted Riverfield for the Friday night jamboree, in which V.J. Knight came up huge for the Rebels’ running game as he ran for two touchdowns, one a 25-yard touchdown and the other a 2-yard touchdown.

The Rebels open up their 2020 MAIS football season next Friday traveling to the St. Joseph Catholic School Fighting Irish in Greenville. The Fighting Irish have won three state football championships and are on a 24-game winning streak going into the 2020 season.

Freeman said the Rebels need to be more conditioned in the first game of the season.

“We have to continue to grind and get in shape,” Freeman said. “We are not ready to play four quarters just yet.”

Kickoff is at 7 p.m. on Friday at St. Joseph Catholic School in Greenville.